Havana, November 23 (RHC)-- The leader of the  Communist Party of Cuba, Army General Raúl Castro Ruz, and the president of the Republic, Miguel Díaz-Canel, attended the political and military ceremony held on Friday on the occasion of the 45th anniversary of the founding of the Mobile Brigade of Special Troops.

The Army General presented the Brigade with the 'Antonio Maceo' Order, a recognition granted by the State Council at the request of the Minister of the Revolutionary Armed Forces (FAR).

Brigadier General Juan Pérez Gil, head of the FAR Directorate of Cadre, highlighted the courage, patriotism, firmness, spirit of sacrifice, and preparation of the Brigade’s members.

During the event - which was attended by the top leaders of the FAR and the Ministry of the Interior, as well as the leaders of the Party and Government of Artemisa and the municipality of Bauta - the military unit was also presented with a diploma for the 45th anniversary, signed by Army Corps General Leopoldo Cintra Frias, minister of the Revolutionary Armed Forces.

Brigadier General Jorge Luis Méndez de la Fe, head of the Political Directorate of the FAR, delivered the event’s keynote speech and he  outlined the honorable missions the Brigade has p[articipated in,  from the decisive combat actions of Cangamba, Sumbe and Cuito Cuanavale in Angola, to the many rescue and protection tasks during the natural disasters that have struck the Cuban archipelago.

Minutes before the beginning of the political and the military ceremony, Raúl Castro and Díaz-Canel unveiled at the entrance of the Mobile Brigade of Special Troops, a plaque with the image of legendary independence hero, Antonio Maceo, which identifies the Brigade as a recipient of the Order that bears his name. 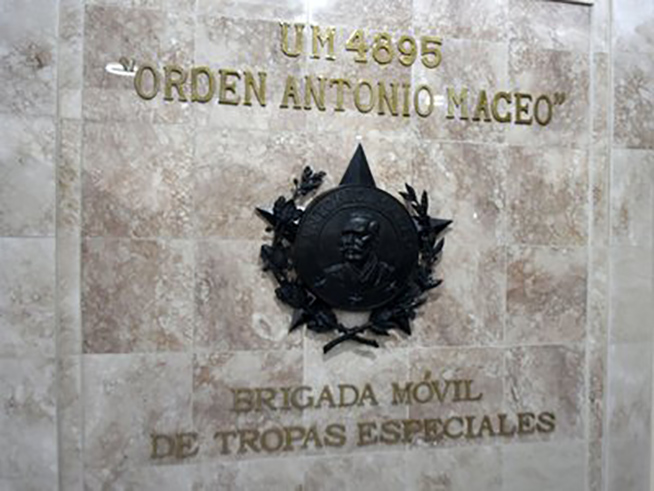