Cuba celebrates 60th Anniversary of the First Declaration of Havana 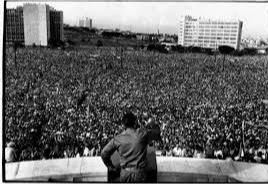 Havana, September 2 (RHC)—Cuba celebrates this Wednesday the 60th anniversary of the proclamation of the First Declaration of Havana.

President Miguel Diaz-Canel said on Twitter that the Declaration maintains its principles in full force in the current scenario of reinforcement of the blockade, financial persecution, and economic aggression of the empire against the island.

Also on Twitter, Foreign Minister Bruno Rodríguez wrote that 60 years after the First Declaration of Havana, 'the importance of the principles of sovereignty and self-determination of our peoples is reinforced'.

“They are essential in the face of the hegemonic threat of the Monroe Doctrine to the countries of the hemisphere,” Rodriguez added.

The 1st Declaration of Havana was the reply of the people of Cuba to the Declaration of San José, signed on August 28, 1960, by the foreign ministers of the governments belonging to the Organization of American States.

The San Jose document, adopted under enormous U.S. pressure, implicitly condemned the supposed interference of the USSR and China in the Western Hemisphere.

An estimated 1 million people gathered at Havana's Revolution Square, constituted as the National General Assembly of the People of Cuba, overwhelmingly approved in a direct vote the counter-declaration read by Commander in Chief Fidel Castro Ruz.

The Havana Declaration was a forceful response to the U.S. government's hostile policy towards the Revolution, which had canceled the purchase of sugar from Cuba, three months earlier, in an attempt to starve the Cuban people into submission.