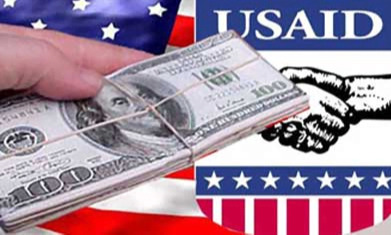 The "democracy" of dollars and counter-revolution

The request of the U.S. government for 20 million dollars from its budget for 2022 assigned to what it describes as "democracy programs in Cuba," aims at strengthening organizations established in the United States with a history of interference.

According to press reports, the awarding of that amount would be certified by an official record recently created in the United States, where the country’s authorities stated that Cuba does not fully support the fight against terrorism that Washington claims to be undertaking.

Several analysts underscored the possibility of more resources being given to USAID, the U.S. Agency for International Development, and NED, the National Endowment for Democracy.

These U.S.-based entities use taxpayers' money to destabilize other nations governed  by presidents that reject
White House dictates.

Over the past two decades, the U.S. has devoted nearly $250 million dollars to subversion programs against Cuba.

In Cuba as such, USAID and NED, which have been pointed out as the CIA facades, the Central Intelligence Agency, finance and instruct groups in society to disrupt public order.

Competent organizations have documented the allocation by USAID and NED of millions of dollars to mercenaries, many of them with operations in the United States, but linked to counterrevolutionaries in the Caribbean nation.

The aim would be to promote what the special intelligence agencies call "non-violent struggle" or soft coups.

On the other hand, the Cuban media presented evidence about the plotting of individuals abroad with national citizens in Cuba, to generate social unrests and carry out vandalism acts.

Of course, part of the resources generously provided by Washington would go to the so-called independent journalists based abroad, whose mission is to portray an image of confusion and social instability of the Caribbean island.

Cubans are too well informed and educated to let themselves be duped and remain alert because they know who pays and who executes the orders.