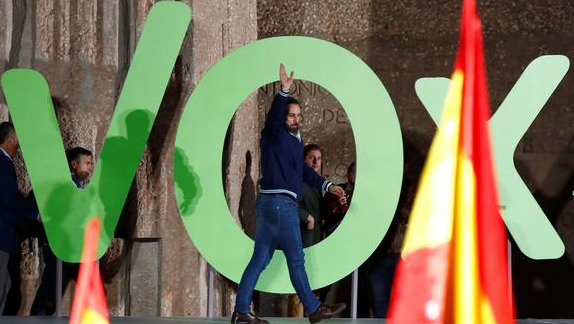 After the recent regional elections in the community of Castilla y Leon, the largest and most affected by depopulation in Spain, the far-right party VOX could for the first time in its history become part of a government in the European country.

Until now, the neo-fascist organization had used its growing results to legislatively support related groups, mainly the Popular Party, PP, but never had the opportunity to be part of a local executive.

This time, however, it jumped from one to 13 deputies and became the hinge for the conservative Alfonso Fernández Mañueco to remain as regional president, after winning 31 seats, out of the 41 that grant the absolute majority in the parliament of Castilla y León.

The elections in that community were a debacle for the Spanish Socialist Workers' Party, PSOE, which lost five points and was left practically without allies because Unidas Podemos barely won one deputy.

The Ciudadanos party continued its path to extinction, dropping from 12 seats in the Cortes to just one. Curiously, the votes it lost did not benefit its right-wing counterpart PP, but went to VOX.

Already the extremist Santiago Abascal put a price on the support to Fernández Mañueco and it is the regional vice-presidency, from where he would have the opportunity to start putting his ideas into practice.

VOX's ideology includes eliminating the right to abortion, criminalizing migrants and erasing the Historical Memory project, which compiles the crimes committed during the dictatorship of Francisco Franco.

As I have said in previous comments, the Spanish extreme right also intends to form a neo-fascist front in Latin America and the Caribbean, a region it seeks to recolonize under the cover of the absurd project of a supposed "Iberosphere".

The results obtained by this political group in Castilla y León are in addition to those of Andalusia in 2018, when it won 12 of the 105 seats in the regional Parliament, thanks to which the PP stripped the PSOE of power.

Now Abascal, the leader of VOX, is preparing with this momentum to try to make the big leap in next year's general elections. A triumph there would endanger not only Spain, but the entire European Union, something that sensible minds in the Iberian country cannot lose sight of.