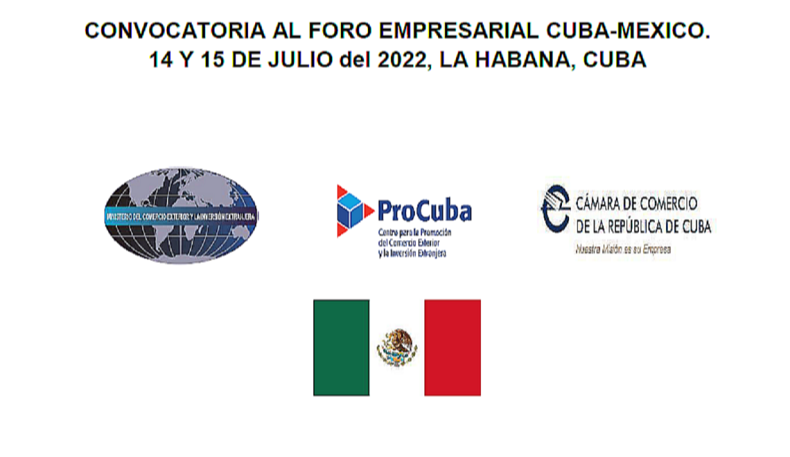 The convening in July of a forum between businessmen from Cuba and Mexico will allow boosting the commercial relationship between the two countries, with a long friendship based on respect and solidarity, which has been consolidated

The convening in July of a forum between businessmen from Cuba and Mexico will allow boosting the commercial relationship between the two countries, with a long friendship based on respect and solidarity, which has been consolidated in recent times through a fluid political dialogue and visits at the highest level.

Havana will host this meeting, which will be open to all sectors of the economy, with emphasis on agribusiness, biotechnology and pharmaceuticals, tourism and renewable energies.

It will be an ideal space for Mexican businessmen to exchange with the new actors of the Cuban economy and promote the exportable funds of our country.

In recent years, bilateral trade has increased, and although Mexico is our second largest trading partner in Latin America and the Caribbean and the sixth largest in the world, it is still far from reaching the high potential for its development for which both parties are working.

On that path, last December a meeting was held in Mexican territory at the Cuban embassy with businessmen to update them on the economic outlook in the largest of the Antilles, the facilities it offers, the expansion of the portfolio of opportunities and the existing legal framework.

In 2020, in March, a Trade and Investment exhibition was held in Mexico City, in which 70 companies from the archipelago exhibited their products and services.

The event was an opportunity to celebrate the 40th anniversary of the creation of the Cuba-Mexico Business Committee, the oldest of those established by the Cuban Chamber of Commerce, which has highlighted the confidence of Mexican businessmen, despite the pressures and the tightening of the U.S. blockade.

According to the entity, there are currently some 40 Mexican branches here and Mexican firms are investing in the Mariel Special Development Zone, west of Havana.

Between the two states there is also an economic complementation agreement ACE No. 51, which grants tariff preferences for the import of various goods.

In addition, in 2014 the office of ProMéxico, an organization in charge of strengthening Mexican participation in the international economy, was inaugurated in Havana.

The two nations are seeking new business options, taking into account the great existing potential and the respect and trust between the two peoples, united by history and a great friendship.