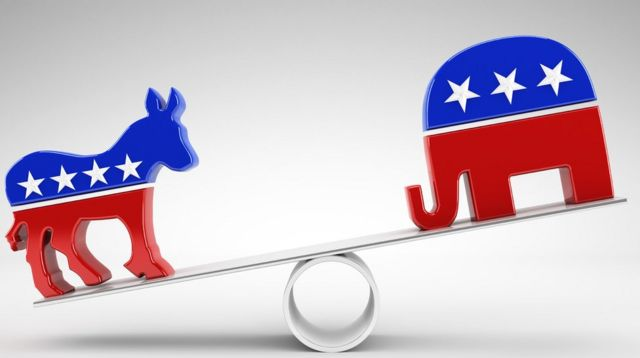 The United States celebrates today its mid-term elections, which are seen as a measure of the management of the first two years of the incumbent president, in this case Democrat Joe Biden, and constitute the most important event of the electoral cycle in the country after the race for the presidency.

These elections are a difficult test for the incumbent president's party, which has historically had poor results. In that sense, the odds are against the Democrats, since Biden has a low approval rating.

At stake on this day are the 435 seats in the House of Representatives and 35 in the Senate, as well as other state and local offices.

The president's party currently controls Congress, albeit by a slim majority. In the House of Representatives it has 222 seats to the Republicans' 213, and in the Senate, Vice President Kamala Harris casts the tie-breaking vote, giving the Democrats control of the Upper House.

According to experts, Republicans, the party of former President Donald Trump, emerge as the best positioned to win the House of Representatives, while in the Senate the results are uncertain.

Another possible scenario, for some, is that Trump's constant presence in rallies of Republican candidates could be reversed against the also called party of elephants.

The outlook, however, is quite complicated for the Democrats, who in the event of losing control of Congress would see their power considerably reduced in the next two years of Biden's term and the possibility of passing laws on important issues.

The economic situation, with a high rate of inflation and a loss of purchasing power, is the focus of the electorate's attention. Other issues of interest to Americans are the numerous shootings, abortion rights and immigration.

There is concern about the highly polarized political climate in the country, against the backdrop of the support of many voters and even Republican candidates for Trump's controversial claim, without evidence, that the 2020 presidential election results were rigged.

The takeover of the Capitol on January 6 last year by supporters of the outgoing president is very close, which continues to cause some nervousness in American society, which is facing a tense atmosphere and political violence with threats to election officials.

What is really clear is that the results will determine whether Biden will be able in the second half of his term to carry out his agenda. In fact, if the Republicans manage to control only one House of Congress, they will make the President's job much more difficult and, according to analysts, they will go all out against the Democrats.