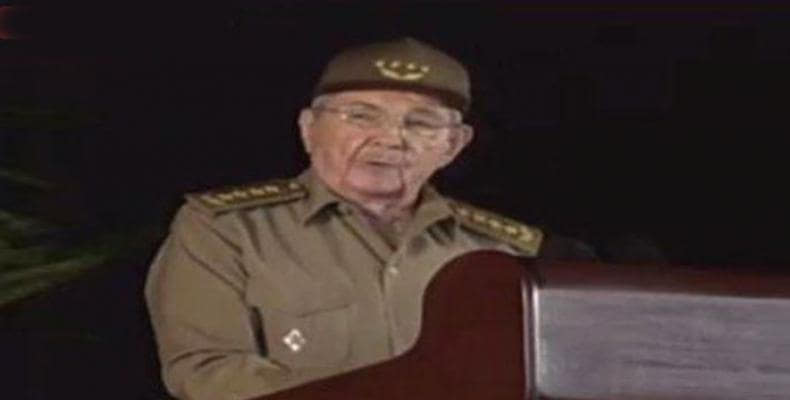 Radio Havana Cuba brings you some excerpts of that speech.

“Tomorrow in a simple ceremony his ashes will be placed in the Santa Ifigenia Cemetery, very close to the mausoleum of National Hero José Martí; to his comrades in arms of the Moncada, the Granma, and the Rebel Army, the underground struggle and the internationalist missions.”

“A few steps away are the tombs of Carlos Manuel de Cespedes, the Father of the Homeland, and the legendary Mariana Grajales, mother of the Maceos, and I dare to say here in this rally, also the mother of all Cubans. Nearby is the pantheon with the remains of the unforgettable Frank País García, a young Santiagero, murdered by henchmen of the Batista tyranny at 22 years of age, a month after the falling in action of his younger brother Josue, also in this city. Despite his youth, Frank set an exemplary record of struggle against the dictatorship, standing out as the head of the armed uprising of November 30, 1956, in support of the landing of the Granma expedition, as well as the arranging of decisive shipments of weapons and combatants for the nascent Rebel Army in the Sierra Maestra mountains.”

“Since news of the death of the historic leader of the Cuban Revolution, late on the night of November 25, the pain and sadness descended on the people with his irreparable physical loss, and the people have responded with displays of strength, patriotic conviction, discipline and maturity, massively attending homage activities organized and pledging fidelity to the concept of Revolution, as outlined by Fidel on May Day of the year 2000. During November 28 and 29, millions of compatriots have added their signatures in support of the Revolution.”

“In the midst of the pain of these days, we have felt comforted and proud, once again, over the impressive reaction of children and young people, who declared their readiness to stand faithful to the ideals of the leader of the Revolution.”

“On behalf of the Cuban people, the Party, the State, the Government, and the families, I want to express gratitude for the words of affection and respect for Fidel, his ideas and his work, that continue to arrive from all over the world.”

“True to the ethics of Jose Marti that "all the glory in the world fits into a grain of corn", the leader of the Revolution was opposed to personality cults and was consistent in that attitude until the last hours of life, insisting that after his decease, his name and his figure not be be used to name institutions, squares, parks, avenues, streets or other public places, that no monuments, busts, statues and other similar forms of tribute be erected in his memory. Heeding such determination by comrade Fidel, we will present to the next session of the National Assembly of People's Power the relevant legislative proposals for his will to prevail.”

"That we can resist, survive and develop without renouncing the principles and achievements of socialism in the midst of a unipolar and omnipotent world of transnational corporations that has emerged following the collapse of the socialist camp in Europe and the desintegration of the Soviet Union.

"The permanent teaching by Fidel is that, yes, we can, that people can overcome the harshest of conditions, if their will does not falter, a correct assessment of each situation is made, and the just and noble principles guiding them are not given up."

“That is the undefeated Fidel, who summons us with his example, and with the demonstration that Yes, we were able to overcome, yes, we are able, and yes, we will be continue to be able! In other words, I repeat, that it was demonstrated that we were able to, that we are able, and will be able to overcome any obstacle, threat or turbulence in our firm commitment to building socialism in Cuba. Which amounts to ensuring independence and sovereignty for our homeland!”

“Before the remains of Fidel at Plaza de la Revolución Antonio Maceo, in the heroic city of Santiago de Cuba, let us swear to defend our homeland and socialism! And together, let us all reaffirm the statement by the Bronze Titan Maceo: "If they do not perish in the fight, whoever tries to take possession of Cuba, will collect only the dust of its soil, flooded with blood!”