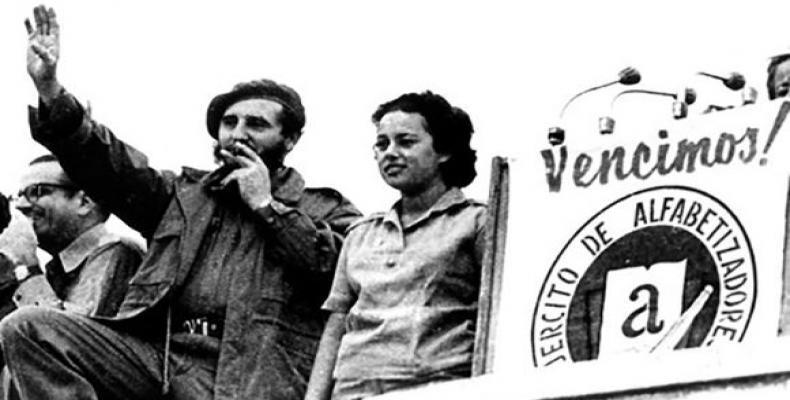 December 21 (RHC)-- The Cuban Ministry of Culture and Casa de las Americas are hosting an academic-cultural conference to commemorate the 60th anniversary of the 1961 National Literacy Campaign –the first, largest and most important cultural action carried out under the Cuban Revolution.

Conceived by Revolution leader Fidel Castro, based on the idea of National Hero José Martí that ‘People can only be free if they are truly educated’, the Cuban Literacy Campaign concluded on December 22, 1961, after which Cuba was declared Illiteracy Free Territory of the Americas by UNESCO.

During Monday’s first session of the two-day event to commemorate the 60th anniversary of this milestone of the Cuban Revolution, the president of the Institute of Cuban History Yoel Cordoví Núñez and the director of the Havana-based Literacy Campaign Museum, Luisa Campos, spoke extensively about the historical context in which the Cuban Literacy Campaign took place.

For her part, Marta Núñez, a sociologist and professor emeritus of the University of Havana spoke about the impact of the Campaign on Cuban women.

Besides the testimony of participants in the literacy campaign, either as young teachers or students, the event’s program includes round table discussions on the Continuity of the Literacy Campaign, and the strong values of solidarity and internationalism guiding it.

Other highlights include the lectures ‘The Campaign as a Cultural Revolution’ by writer Victor Fowler, and ‘The International Dimension of the Campaign’, by historian Rainer Schultz, from Harvard University, as well as the awarding of the Literacy Historical Memory contest.