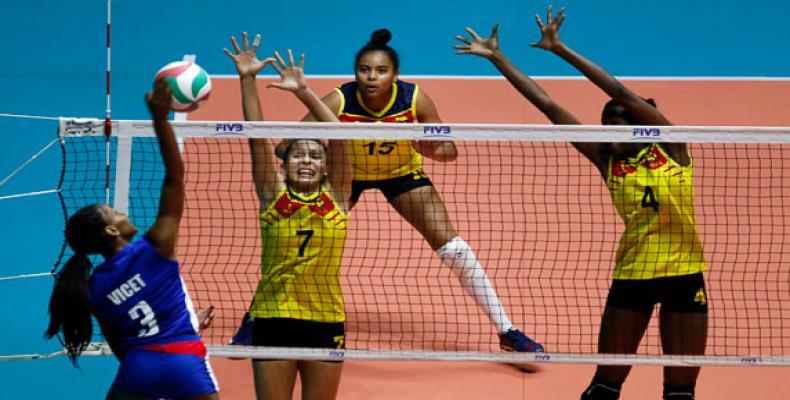 SPORTS NEWS for MONDAY, MAY 15th

Cuba defeated Puerto Rico by a score of 3-0 (25-18, 25-21, 25-20) for the Pan American Cup of women's under-20 volleyball tournament in San Jose, the capital of Costa Rica, where Heidy Casanova was the top scorer and best opponent.

The NORCECA press officer's report, Carolina Rivas, points out that the bid for the third place became "a slow game, where Cuba recovered from a deficit of five points in the second set" and its players "were not As powerful as usual. "

The tournament left them in possession of their second bronze medal in the history of such confrontations, now with a balance of three successes and a setback, VS the United States that cost them not to qualify for the World Championship.

The Puerto Ricans said goodbye with a balance of 2-2.

Casanova led the offensive with 15 points, Diaris Perez contributed with 12, and Ailama Cese and Laura Suarez scored 11 and 10, respectively.

"We did not achieve our goal, to play for gold and for the world cup. We try to give more on the pitch but we are not well, "said Cuban captain Diaris De La Caridad Pérez.

"Today they looked unmotivated," said Robinson, who was unhappy because "they trust a rival who is not their level" despite being called to perform in the same way, regardless of the opposite.

"We have athletes who showed progress, such as Gretell Moreno, Laura Suárez and Heidy Casanova. Our strength has to be combined with the development of more game skills, "said the coach.

Dariana Hollingsworth, Puerto Rico captain, said: "This is a team of players between the ages of 14 and 16 playing in a much higher category, so I think they did a good job."

The Cuban Arlenis Sierra made it clear that she is one of the most promising cyclists in the world, being third in the III Amgen Tour of California, only surpassed by the Olympic champion Anna Van Der Breggen and the American Kattie Hall.

Sierra, 24-year-old, was only 31 seconds behind the Dutchman Van Der Breggen, who was second, but relegated on Sunday in the fourth and final stage by just one second to the previous toe, Anna Hall .

In addition to being placed on the podium, the Cuban took two awards, the leader in the score and first among the young figures.

In the only intermediate goal of the final stage Var Der Breggen practically defined the race to surpass Hall in closed sprint, both in front of the combative pedalista of Manzanillo (southeast of Cuba).

Experts consider that the Californian contest - included in the UCI WorldTour - is the most important staged race of all that is celebrated professionally in America.

The fourth and final installment - coinciding with the first stage for the men - was played over 70 km at a Sacramento circuit and was won by Italian laureate Giorgia Bronzini (1h38.03).

Coryn Rivera, Kirsten Wild (Holland), Hanna Barnes (Great Britain) and Arlenis, who with their fifth place had exceptional regularity, were among the top 6 in all four divisions.

"To stay on the podium between some of the best in the world and in such a rigorous race with this one, he tells me that I'm on the right track and gives me the courage to move on," Arlenis told Radio Havana Cuba (www.radiohc.cu).

The best Cuban rider of the moment had words of recognition for the mechanic during four decades of the Cuban selection of cycling, Juan Fernandez, who was killed when he was struck by a cyclist in the recent Pan-American Championship of Dominican Republic.