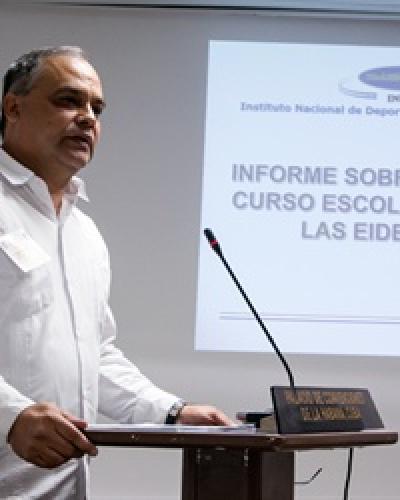 At the Meiji Jingu Stadium, the oldest ballpark in Tokyo, both sides expressed their satisfaction regarding Cuban ballplayers who are playing in the Japanese Professional Baseball League.

Vento said that the Cuban players in Japan feed from the professionalism and the rigorous training sessions of Japanese baseball teams, to gain experience and overall preparation.

Kato mentioned the admiration and respect shown by the local audience to the Cuban players, who are quite popular among Japanese baseball fans.

The Cuban delegation made up by Vento Montiller, Cuban Olympic Committee President Roberto Leon Richards, and INDER Vice-President Jorge Polo Vazquez, was received on Monday at the headquarters of Panasonic, where they were able to check out part of the new technology that will be used in the Tokyo 2020 Summer and Special Olympics. The Japanese company is the main sponsor of both events, and Panasonic has developed a few innovations in order to contribute to the event’s success.