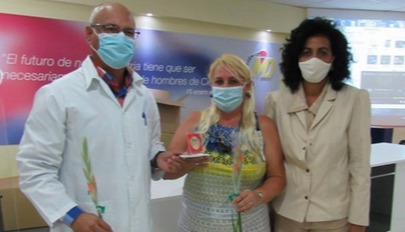 Havana, December 3 (RHC)-- The seal of Merit to Humanism, Sensitivity and Solidarity was given to the Institute of Sports Medicine (IMD), granted for the only time by the National Union of Health Workers and the Ministry of Public Health, given the outstanding work in the confrontation with COVID-19.

In the event held in the theater of the prestigious institution -- on the occasion of the 54th anniversary of its founding by the Leader of the Cuban Revolution Fidel Castro -- a group of workers who excelled in the fight against the pandemic was also praised.

Ana Gloria Calderón Zedeño, member of the National Secretariat of the Education, Science and Sports Workers' Union, presented the award to Dr. Pablo Castillo Díaz, director of the IMD, and to the general secretary of the union, Judith Ramírez Guzmán, who ratified the collective commitment to maintain an exemplary conduct towards the principles of the Cuban Revolution.

The occasion was propitious to praise 51 comrades who, since the beginning of COVID-19, have placed themselves at the disposal of the Ministry of Public Health to provide services in isolation centers and hospitals.

There they worked hard to answer the call of the country, this being the first Olympic medal of the Cerro Pelado Contingent, as the group of professionals participating in the task was called.