The 10 of the people: Diego Maradona 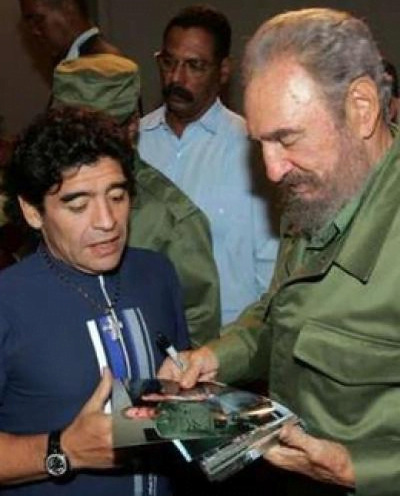 The physical departure of Diego Armando Maradona on November 25, 2020 raised the "Pelusa" in the hearts of his compatriots and soccer lovers around the world.

Havana, November 25 (RHC)-- The physical departure of Diego Armando Maradona on November 25, 2020 raised the "Pelusa" in the hearts of his compatriots and soccer lovers around the world.

I had the opportunity and the privilege of meeting the idol several times in Havana and Varadero, in 1987, when he came to Cuba -to the surprise of many abroad- to receive the award for Best Sportsman of the region in the Annual Sports Survey of the Prensa Latina Agency.

I will never forget the impression made on me by the simplicity and solidarity of the so-called "Pibe de Oro", that young man who at 26 years of age, in a stadium in Mexico, starred in an anthological goal first and another with the "hand of God" to defeat the English 2-1 in 1986.

All this served, in a symbolic way, to vindicate the fallen countrymen in the Malvinas by the interference of the European power.

That extraordinary opening goal, dribbling over opponents for some 50 meters and then dislodging the goalkeeper to nestle the ball in the net, in addition to being called the most spectacular goal of the 20th century, was the prelude to Argentina's collective success in the FIFA World Cup.

During the meetings in Cuba, it seemed unlikely that I could be close to this legend, who showed interest and attention for what I told him and was willing to give me an interview in order to promote and publicize the exciting game among his followers in this Caribbean country.

He also agreed to sign a color postcard addressed to my sons, Ernesto and Abel, whose names he asked me when he pleased me.

That is the player of small stature, strong physical build and deep eyes that I remember on this date of the first anniversary of being placed in the other universe, in that of the Olympic and world deities along with the Spanish-Argentine goal scorer Di Stefano, the Hungarian "matador" Ferenc Puskas and the Soviet goalkeeper Lev Yashin.

He will surely be so, accompanied, cheered as he was in the earthly world in South Africa, Spain, Italy, Argentina, United Arab Emirates, Mexico, Brazil and in so many nations.

Thank you Maradona for so many virtues, for illuminating this discipline, even if some people overshadow obviating that we are social beings with lights and shadows, virtues and defects, but you are there, in the feeling of the grateful ones, of those who heard you raise your voice to reprove the corruption of soccer leaders.

Those who saw you defend the poor of the planet, the children of Cuba, the historic leader of the Cuban Revolution, Fidel Castro, Commander Hugo Rafael Chávez and Néstor Kichner.

There are those who in this exciting world have different adjectives but you have one that takes you to the top for your humility, for not forgetting your origins in Villa Florido, for giving love and that you cultivated and only corresponds to you: "The 10 of the people: Diego."

*National exporter and former president of the Cuban Soccer Association.