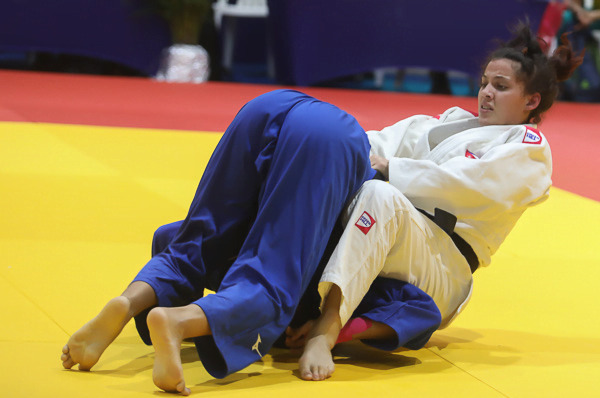 Seven medals (2-2-3) with only six representatives was the balance of Cuban judo in the First Pan American Junior Games, after the bronze achieved this Sunday by the mixed team in the Yuri Alvear Combat Coliseum, located in the municipality of Jamundí.

Havana, November 29 (RHC)-- Seven medals (2-2-3) with only six representatives was the balance of Cuban judo in the First Pan American Junior Games, after the bronze achieved this Sunday by the mixed team in the Yuri Alvear Combat Coliseum, located in the municipality of Jamundí.

Without options to "refresh" anyone in the middle of the competition, unlike teams like Brazil and others, the students of Andrés Franco and Boannys Chang made their way to the podium for the third consecutive day.

In the quarterfinals they celebrated against the Colombian team with a 4-1 slate, thanks to the performances of Idelannis Gómez (70 kg), Sergueis Rodríguez (90 kg), Thalía Nariño (plus 78 kg) and Omar Cruz (plus 100 kg).

The semifinals were a classic of the Americas between Cubans and Brazilians, dominated by the latter with a close score of 4-3 and some controversy.

Our team won through Idelannis, Sergueis and Thailien Castillo, but the remaining members of the team could not celebrate and the opportunity to reach the final as favorites to the throne escaped.

The seventh bout placed Sergueis Rodriguez (he had to double) and Kayo Fabricio Silva Dos Santos face to face in the 100 kg, a division above the usual one of ours (90 kg).

The fight was intense and even until the decisive action of wazari, protested and claimed by the Cuban delegation, but without being able to prosper.

With their spirits battered and their physique weakened, they had to compete against Venezuela for the bronze medals, won with a clear difference of 4-1.

Sergueis, Thalía, Thailien and Kimy Bravo won. Only Omar Cruz skated against Juan Lorenzo Diaz Campos, in extension to the golden rule and victim of exhaustion.

"A very close competition. And although we got the bronze medals we could have won the gold medals. In doubt the wazari that was scored to Sergueis in the definition against Brazil. We leave with a medal, which is the most important thing", commented Bravo as soon as he got off the tatami.

"It was a very intense afternoon, but we got a result. We are not satisfied with the bronze because we came to win bout by bout, but we knew in our hearts that we could go forward," added Thalia in the mixed zone of the facility.

"It was a great competition, despite what happened with the Brazilian team. We wanted to dispute the gold, but it was not possible. I gave my best and I feel that it was not wazari the action that cost me the decisive bout of the semifinals. But well, the referees decide and it's time to prepare for the next one", commented Sergueis.

The green and yellow team defeated the United States (4-0) in the final, shortly after the Dominican Republic won the other third place over Mexico (4-1).

Brazil dominated the competition with six crowns, one subtitle and four bronze medals. Cuba followed with a 2-2-3 record.