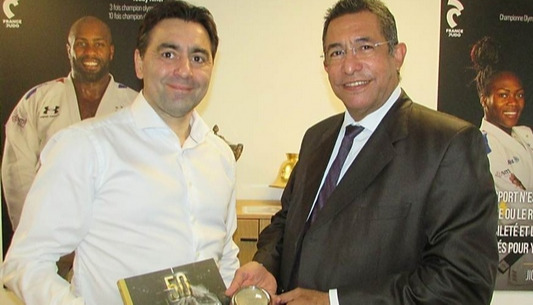 Paris, January 21 (RHC/JIT)-- The president of the French Judo Federation, Stéphane Nomis, and the Cuban ambassador in Paris, Otto Vaillant, laid the groundwork on Thursday for the signing of a bilateral collaboration agreement in the high performance of this sport.

Promoted by the Association Cuba Coopération France (CubaCoop), the meeting held at the headquarters of the Federation allowed to address lines of work such as the preparation of athletes for major competitions, the exchange of knowledge of coaches and the development of a discipline with a long tradition and results in both nations.

Nomis expressed his willingness to support the Island's judo players with training bases in French cities, with cycles of up to one month, which would include the coverage of accommodation, food and transportation expenses within the country.

Likewise, he advanced the possibility of sending to the Greater of the Antilles donations of fundamental resources for the practice of the martial art created by Jigoro Kano, based on coordination with the Cuban counterpart on the main needs.

I am very happy to help, I have very good memories of Cuba and I think we are going to have a nice collaboration, he stressed at the meeting, which was also attended by the president of CubaCoop, Victor Fernandez, and his vice president Manuel Pascual.

Ambassador Vaillant thanked Nomis and the French Judo Federation for their willingness to promote sports cooperation under the principle of solidarity.

Cuba highly values this type of rapprochement, which it practices with several nations, for example through the contribution of coaches, who prepare athletes who then compete against ours in the international arena, said the diplomat.

Vaillant commented on the challenge for the Caribbean country to develop sports under the economic, commercial and financial blockade imposed by the United States for more than six decades.

Nomis and the Cuban ambassador talked about the celebration in Paris of the 2024 Olympic Games and the possibility of supporting the preparation of the judoists of the Island, so that they arrive at the event under the five rings in optimal conditions.

They also discussed the upcoming celebration of the Grand Slam of Judo in Paris, on February 5 and 6, a very popular tournament in France, in which Cuban athletes have traditionally competed.

Nomis highlighted France's interest in promoting sports collaboration, in a context marked by the Olympic cycle with an eye on Paris 2024.

France and Cuba are two judo countries and that gives strength to a cooperation that I am sure we will implement quickly and with good results, said the former athlete, multiple European and grand slam medalist in the 81 and 86 kilogram divisions.

The president of the local federation considered of great importance the fraternity and the rapprochement between human beings, above the logical spirit of competitiveness that sport generates.