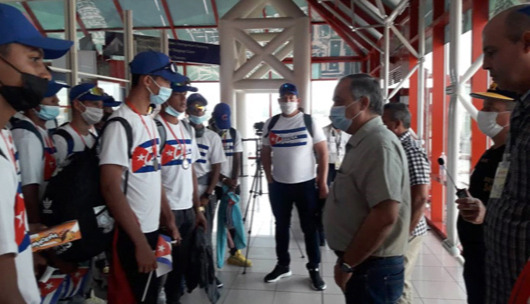 The president of INDER, Osvaldo Vento Montiller, received the Cuban team that won bronze medals in the Under-15 Baseball Pre-World Tournament held in Valencia, Venezuela.

"We welcome them with the satisfaction of knowing that they are worthy of the many applauses that our people gave them," the official said on Tuesday at Havana's José Martí International Airport.

"Their high-carat comebacks and permanent conviction of victory filled us with healthy pride," said Vento, accompanied by the vice president and the general director of high performance of his organization, Ariel Sainz Rodriguez and Jose Antonio Miranda Carrera, respectively.

"Bronze that tastes like gold not disputed for reasons beyond the control of those who wasted dedication on the field," tweeted shortly after the head of Inder. "World Cup place and an excellent sign for the future of #BeisbolCubano. Welcome, the homeland is proud to see you," he added.

On the same social network, the deputy prime minister of the Republic of Cuba, Jorge Luis Perdomo, wrote: "Proud we are of your performance and qualification for the World Cup. You validate once again the quality of the sports education system. Congratulations.

The Island's team should have disputed the title, but suffered the forfeiture of its semifinal victory over Venezuela due to the use of a pitcher disqualified for that day, according to the rules of the event.

Thus, it was forced to opt for third place, which it won with credit over Puerto Rico.

The team's shortstop Alejandro Cruz, co-leader in hits, with 10, and fifth in average (.455) was elected the most outstanding player of the tournament.

"It has been a strong, demanding tournament. We were not able to win first place, but this medal has the taste of gold for us. This award is for the Cuban fans, my family, the people of Espiritu and especially my teammates," he commented at the time.

In addition, three other individual awards were won by Cuban athletes: the bartender Duliesky Ferrán was elected best defensive player and the starter Roberto Peña and the center fielder Alejandro Prieto won places in the All-Star team of the fair