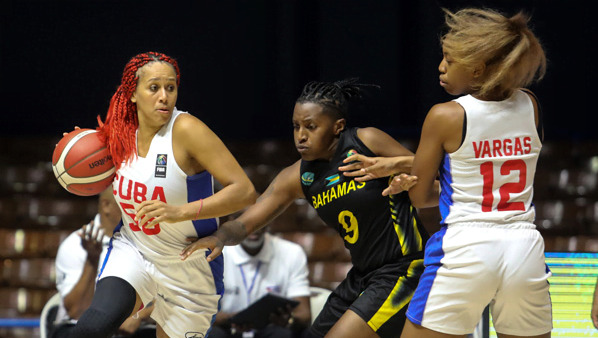 Havana, July 14 (JIT) - The Cuban women's basketball team taking part in the CBC Women's Championship 2022, held at the Coliseum of the capital's Ciudad Deportiva, won on Wednesday with a 76-44 score against the Bahamas.

The team coached by Márgaro Pedroso took the court with impetuosity in its debut and overwhelmed the rivals in the first quarter, in which they established a difference (20-8) that they would not lose in the rest of the game.

The Cubans faced some difficulties later, especially in the third quarter, when the visitors won with a close score of 16-14. However, for the last quarter, the regular team took the court and extinguished the Bahamian rebound with an unbeatable 24-6.

Defensively, the home team did a good job with 37 turnovers and 29 stolen balls, led by captain Anisleidy Galindo (5).

The player from Pinar del Río directed the local offense at will, handing out seven assists. She was only surpassed by María Isabel Montero with eight. Recently arrived from Mexico and after a long wait in Cancun, along with her teammate Yamara Amargo, Galindo asked the coach for minutes and took the leading role as playmaker, minimizing the problems of Dairis Tornell to upload balls.

The 33-year-old point guard also seconded in rebounds (7) Cuba's leader, young talent Isabella Jourdain, who caught 10 balls under the boards and compiled 14 points for a double-double.

The Havana native was also the most efficient with +30, followed by Galindo (+28) and another youngster recently champion of the 2022 Superior Basketball League with the Mambisas de Santiqgo de Cuba, Naomi Vargas (+27), who also finished as the top scorer with 15 points.

The problems for the Cubans were again at the free throw line with 47.1%, product of 16 baskets in 34 opportunities. This is an old evil that joins the ineffectiveness from long distance, with only two baskets in 21 attempts for an unimpressive 9.5%.

The quick transitions also showed some mismatches typical of the debut, although it is worth noting that the shot was properly selected, supported by a very good ball rotation that constantly outwitted the opposing defense.

"We were able to move players around so that everyone had the opportunity to play. We need to improve in free throws and in some offensive aspects because defensively we were good. It has been a long time since we played at home and maybe that put a little bit of pressure, but we are satisfied with the result," said Predroso after the game.

Earlier in the day, as expected, the Dominican Republic defeated Jamaica by a disproportionate score of 98-46. Like Cuba, they took an important step towards qualifying for Centrobasket 2022, reserved for the two best-placed teams in this tournament.