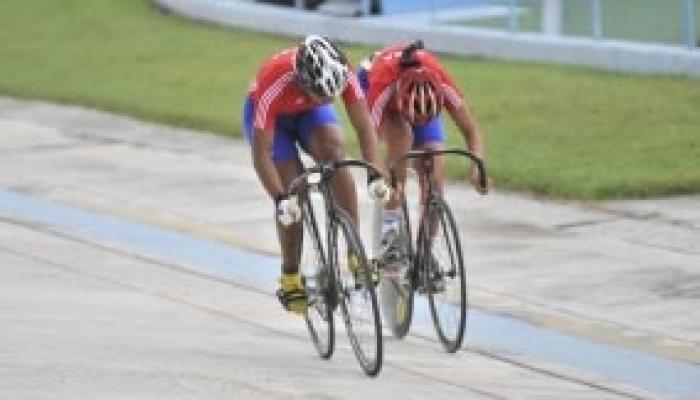 A Cuban quartet of female cyclists conquered the team event at the Cuban Track Cycling Cup.

The team of Yumaris Gonzalez, Marlies Mejias, Yudelmis Dominguez and Arlenis Sierra was totally superior in the series against the Venezuelan opponents, winning the 3 kilometers of competition with a time of 5:02.362, said cuban coach, Leonel Alvarez.

The winners were followed by their compatriots of Team B (Mailyn Sanchez, Anel Enjamio, Heydi Herrera and Claudia Baró), that scored 5:33.980, also before a Venezuelan team, who abandoned the track.

With this result, Cuba swept the general medals, with 3 gold, 1 silver and 1 bronze.

Cuban multi-medalist Lisandra Guerra stood out with 2 golden medals at the Cuba Track Cycling Cup, which runs until Saturday.

The cyclist won her title in the women's speed team and 500m time trial at the Reinaldo Paseiro National Velodrome, east of Havana.

Tomorrow, the first competition will be the women's team pursuit.

Cuban badminton player Osleni Guerrero debuted with a victory in the doubles category at the International Tournament of Brazil, held in the city of Sao Paulo.

Guerrero and the Brazilian Filipe Toledo defeated the local pair Leonardo Marcellos and Lucas da Silva by 2-0 and partials of 21-12 and 21-18, in just 30 minutes. Later, Guerrero, Guadalajara-2011 runner-up, will face Marcellos one on one.

The 53rd Cuban Baseball Series will begin on November 3rd in the central city of Santa Clara, 206 km. east of the capital, the Baseball National Federation confirmed today.

The official inauguration will be held at the Augusto Cesar Sandino stadium with a duel between the reigning champion, Villa Clara and runner-up Matanzas.

However, unlike previous tournaments, Season openers will be held simultaneously in 7 other stadiums around the country.

Isla de la Juventud and Pinar del Rio will also play in the first sub-series November 3rd-5th, at the Capitan San Luis stadium; Las Tunas-Artemisa game will be held at the 26 de Julio stadium of the latter city; and that of Cienfuegos-Mayabeque clash will take place at the Nelson Fernandez stadium.

Meanwhile, Industriales will also flex its muscles against Santiago de Cuba, at the Guillermon Moncada stadium, Sancti Spíritus will face Guantánamo at the Nguyen Van Troi stadium; Ciego de Ávila will meet Holguín as visitor, at the José Ramón Cepero stadium; and Granma will rival Camaguey at the Cándido González stadium.

The game between Granma and Camaguey could change somewhat due to the interest of Granma provincial authorities in hosting the sub-series, as it coincides with the 500th anniversary of the City of Bayamo, which was founded on November 5th, 1513.

The Federation also informed that as of December 30th there will be a New Year's break and games will restart on Saturday, January 4th, with the selection of reinforcements for the playoffs. The next day, the All-Star game will be held.

Finally, the second part of the series runs January 11th-March 17th with a January 30th-February 10th recess for the Caribbean Series, if Cuba's presence is finally approved, with the team of Villa Clara representing the country.