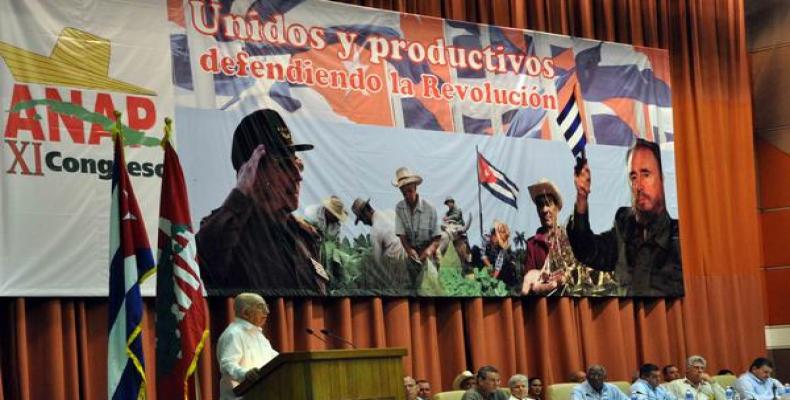 The Cuban Small Farmers' Association, founded by Fidel Castro 56 years ago, plays a front-line role in the ongoing update of the country's economy and it is stronger than ever before.

The statement was made by the 2nd secretary of Cuba's Communist Party, Jose Ramon Machado Ventura in his closing remarks of the 11th Congress of the farmer's organization, which would up Sunday in Havana with the attendance of some 700 delegates from all Cuban provinces.

The association is now witnessing the growth of its membership with new owners of plots of lands granted in usufruct as established in new legislations.

However, Machado Ventura insisted in the need to increase agricultural production by cooperative farms, particularly in livestock, coffee, bee honey, sugar cane, fruits and other crops that constitute staples in the Cuban diet.

The Party leader said the farmers with the association, who contribute 70% of the country's agricultural production, can also help lower produce prices at local markets, which keep high due to the presence of middle men.

The high prices of agricultural products and their impact on the pockets of ordinary Cubans were on the spotlight of debates during the congress.

Cuba has re-established a banking relationship with the US, bringing the countries closer to restoring diplomatic relations, according to a senior State Department official, Cubasi website said.

The official, who spoke on condition of anonymity, refused to identify the bank involved, according to the Associated Press. But a hint was given last week by the chief of the Cuban Interests Section, Jose Ramon Cabanas Rodriguez, during a visit to Bradenton, Florida, when he revealed that Cuba was in negotiations with a Florida-based institution, reports the Guardian. The Cuban government has not yet officially commented.

Cuba's diplomats and employees in the US have had no access to bank accounts or financial services for more than a year now, and have been forced to rely on cash shipments to pay bills and salaries. Cuba's two diplomatic missions in the States lost access to banking services in July 2013, when M & T Bank announced it would no longer handle the accounts of foreign interests. Cuba has since failed to find a replacement bank to handle their business.

Restoring banking operations has been one of Cuba's biggest demands amid recent promises from Presidents Barack Obama and Raul Castro to restore embassies in Washington and Havana after more than 50 years. Another major hurdle to closer ties is the US designation of Cuba as a state sponsor of terrorism, that though will expire on May 29th when ambassadors are expected to be named.

Efforts to bring the two countries closer will continue, with senior officials from both sides scheduled to meet in Washington this week in what's thought could be the last round of negotiations before embassies are re-opened. The Obama administration is looking for guarantees that will allow their diplomats the freedom to travel the island and meet whomever they please, including dissidents and other opponents of the Cuban government. Cuba's demands include an end to the economic blockade and the closure of Guantanamo Bay.

The US broke diplomatic relations with Cuba on January 3rd, 1961, after Fidel Castro demanded the US reduce staffing levels at its embassy amid accusations it was being used to house spies. This followed a long period of declining relations between the two, which included Havana’s signature of a trade deal with the Soviet Union and a US attempt to overthrow the Cuban Revolution through the financing and training of Cuban exiles.

Cooperation between Angola and Cuba on oil drilling marks a "fundamental point" on both states bilateral relations, stated the Angolan Secretary of State for Foreign Affairs, Manuel Augusto.

The official, who was speaking to reporters during the visit to Cuba by the Angolan Vice-President Manuel Vicente, added that the cooperation between both countries confirms the political will and the potential to increase.

Agreements Signed Between Cuba and Portugal

Marcelino Medina, Deputy Foreign Minister of Cuba, visited Lisbon last week to meet with local authorities in order to strengthen bilateral relations. As reported by the Portuguese Foreign Ministry in a statement, Medina’s visit was part of the mechanism of regular political consultations signed by the two countries in April 2014.

They also exchanged views on “urgent and common interest matters on the international agenda, including the resumption of diplomatic relations between Cuba and the United States," the statement said.

According to sources of the Cuban Embassy in Lisbon, the Cuban official also met the Parliament and the Camões Institute, the Cubans living in the Portuguese capital, with the Portugal-Cuba Friendship Association and the Cuban Medical Brigade, as well as representatives of Portuguese entrepreneurs.

In 2014, exports of Portuguese goods to Cuba amounted to 33.5 million euros, while Cuban sales to Portugal barely exceeded 15.5 million, resulting in a positive balance for the European country.

The production of refined sugar in the central Cuban province of Camaguey reached 50 thousand tons since last December in two of its plants.

This production is exclusively destined to cover the ration quota of the population every month with subsidized prices and also to supply the food industry, restaurants and markets where anyone can purchase more of the product at a higher cost.

The largest amount of production, which is priced at over 380 dollars a ton in the international market, goes to the Ignacio Agramonte Sugar Mill while the Argentina factory is currently facing constant problems in the development of the harvest which limited the amount of sugar cane cutting and its refining.

Due to this situation the Camaguey Sugar Company decided to enhance the works at the Ignacio Agramonte plant and stop the operations of the other called Argentina.

The Ignacio Agramonte, which has not intervened in the sugar cane processing for several years, had an output of 32 thousand tons since January, some three thousand more than planned.

Camaguay projected producing 54 thousand 500 tons but due to the problems at the Argentina plant the outcome was much less.

With the beginning of the upcoming harvest possibly in December the two industries in the province will once again begin refining after reparation and maintenance work.