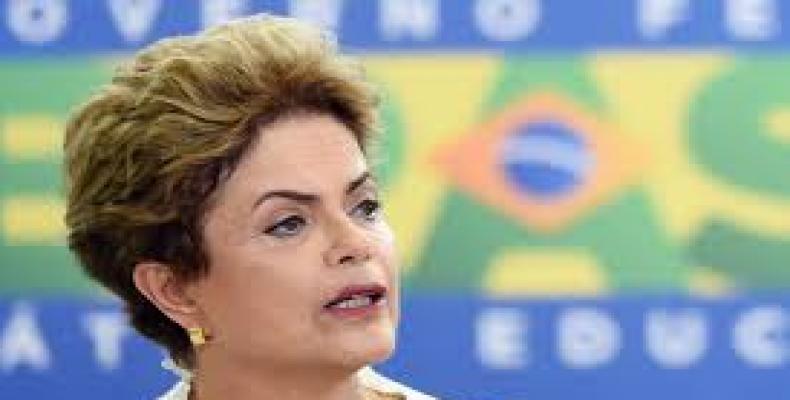 Brasilia, July 28 (RHC)-- Brazil's suspended president, Dilma Rousseff, has stated that she will not be participating in the opening ceremony of the Olympics Games to be held in Rio this August.

In an interview with Radio France International, Rousseff siad that given her current suspension of 180 days from office, she does not want to play a secondary and quite literally a lower role than the president imposed by her country's Senate.  Dilma was slated to be placed in a stand below interim president Michel Temer, according to a government spokesperson.

Former President Luiz Inacio Lula da Silva has also refused an invitation to attend the opening ceremony, according to local media reports.  Dlima Rousseff praised Lula for his work for bringing the games to Rio de Janeiro, which begin on August 5.

Temer was installed as interim president through what critics say was a Senate coup against Rousseff and has since been waging an attack on the progressive legacy of Dilma and Lula. More than 20 million Brazilians were lifted from poverty during Dilma Rousseff’s first term, largely due to initiatives that combat poverty through the promotion of social assistance programs.

Temer’s all-white, all-male cabinet has brought in harsh austerity measures that disproportionately affect the working class by slashing funds for social programs and ministries while at the same time increasing spending on the Olympics.

If Rousseff loses her impeachment trial, she may be permanently removed from office.  Lula also faces corruption charges, which he has called totally baseless.  At the same time, three of Temer’s cabinet members have already left office due to corruption incidents.

Temer is currently serving as interim president, but he has been banned from running for public office for eight years.  Along with Brazil’s political situation, the Rio Olympics has already had a number of problems, including the Zika virus, a partial ban on Russians over state-sponsored doping, issues over sanitation, security and even doubts over whether facilities will be ready in time for the event.