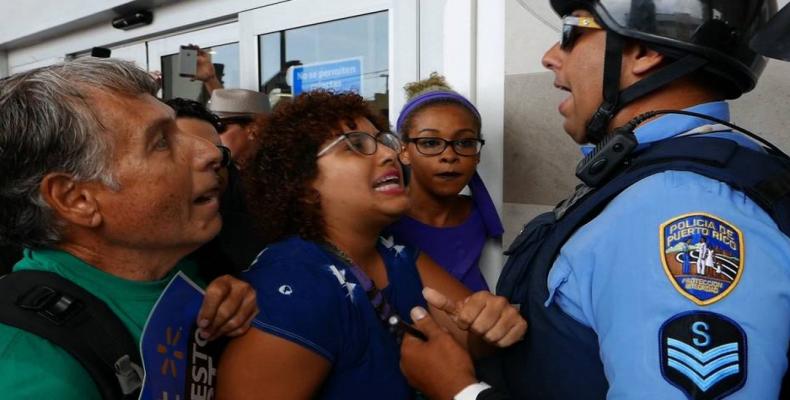 San Juan, September 6 (RHC)-- In Puerto Rico, hundreds of people shut down the island’s biggest Wal-Mart on Monday in protest against the ongoing economic crisis on the island and the companies that protesters say are responsible.

Protesters argue Wal-Mart damages the local economy while only providing precarious jobs for Puerto Ricans.  Last month, a U.S. appeals court ruled against Puerto Rico in its efforts to raise Wal-Mart’s tax rate from 2 percent up to 6.5 percent.

Monday’s protest, which shut down the Wal-Mart for the entire afternoon, was organized by the Socialist Workers Movement.  This comes after a massive protest last week in Puerto Rico outside a conference hosted by the Puerto Rico Chamber of Commerce on the new PROMESA law, which was passed by the U.S. Congress in June, establishing a federally appointed control board with sweeping powers to run Puerto Rico’s economy.

Protesters say the media company’s coverage has been unfairly favorable to the PROMESA law, which was passed by the U.S. Congress in June, establishing a federally appointed control board with sweeping powers to run Puerto Rico’s economy.

Mariana Nogales, a lawyer representing the arrested activists, said: "We are here because they have arrested people for protesting against GFR Media and El Nuevo Día because of their support for the Fiscal Control Board, which these media outlets have been making since the beginning.  For a moment, some media outlets did express that the PROMESA law was not a good law for Puerto Rico.  However, the editorial line has now changed completely to be in favor of the control board."