70,000 Women March Against Femicide in Argentina 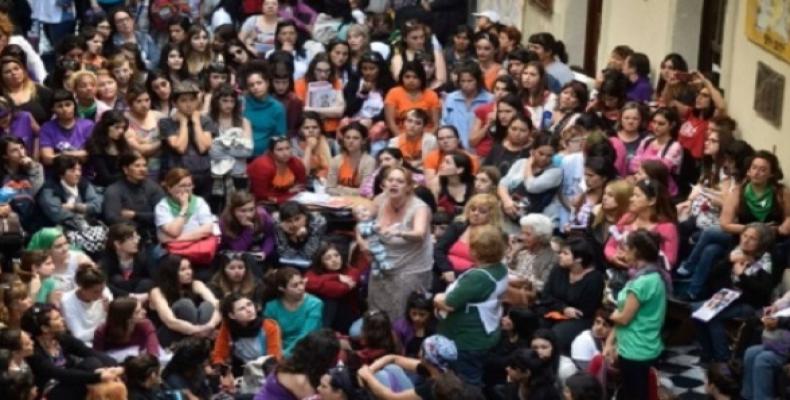 Buenos Aires, October 11 (RHC)-- Tens of thousands of women marched in Argentina against gender violence, femicide and for abortion rights at the 31st Annual National Women’s Forum that took place in Rosario.  The march ended peacefully at the city's historic National Flag Monument, with women chanting slogans like: “If they touch one of us, we all will demonstrate,” “No more femicides,” “Ni Una Menos” (Not One Less) and “For Free, Safe and Accessible Abortion.”

Activists, academics and other feminists attended the three-day event that culminated on Monday in the Argentinian capital with workshops and conferences.  The national lawmaker from the Front for Victory, Soledad Sosa, participated in the event, as well as other lawmakers and former vice-presidential candidate Myriam Bregman from the Socialist Workers’ Party.

“Santa Fe welcomes us with the alarming statistics that it has become the province with the second-highest rate of femicides across the country,” Bregman said while attending the opening rally.  She added: "Here we can discuss what steps need to be taken in the drive to win our rights.  The responsibility of governments and state institutions to face this reality is a constant.”

Organizers of the event said that the gathering would be a huge incentive to fight for women's rights: legal abortion, gender violence, and dismantling networks of human trafficking.

The 2015 march that took place in Mar Del Plata, in Buenos Aires province, was marred by violent attacks by the police forces, as well as far-right and neo-nazi groups.  The protest was overall peaceful this year, although women denounced police violence at the end of the march on social media, with even the injuring of a reporter from state-media Telam with a rubber bullet.

Femicide was at the core of women's demands this year, with one woman murdered every 30 hours according to feminist organizations, sparking a wave of protests in March 2015 in the Argentinean capital under the name of “Ni Una Menos.”