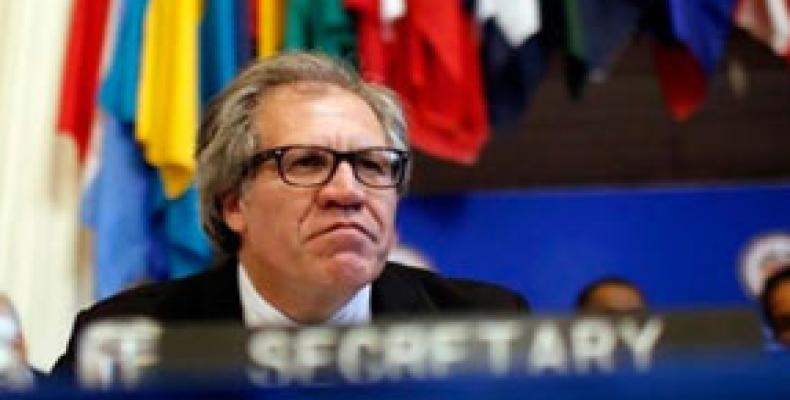 Brasilia, October 11 (RHC)-- Luis Almagro, secretary-general of the Organization of American States, has traveled to Brasilia to meet with de facto president Michel Temer and Foreign Affairs Minister Jose Serra in a meeting Almagro described as “positive” and one that is being widely seen as an effort to legitimize the coup regime in Brazil.

Almagro, who gave only muted criticisms of the highly controversial ouster of President Dilma Rousseff, refused to address the media after his visit, sending out only a handful of tweets about his meeting.  In one tweet, the OAS chief mentioned that Temer and Serra agreed with him on the need to “defend democracy” in Venezuela and the need for a recall referendum to take place in 2016.

Almagro did not mention that Temer came to power in what has been widely described as a parliamentary coup.  Upon taking office, the de facto president has implemented a neo-liberal austerity agenda rejected by voters in previous elections and stacked his cabinet with right-wing political figures.

Regional governments have criticized the head of OAS for his apparent double standard.  Almagro has refused to implement the Democratic Charter against Brazil, but has invoked it against Venezuela and has not been shy about attacking the government of Nicolas Maduro.

The parliamentary coup in Brazil violates the first four articles of the OAS, which call for the "protection of democracy" in all its member states, and the protection of the legitimate exercise of power, as well as protecting the population’s right to choose their government.

Jose Serra, the de facto Brazilian foreign affairs minister, had nothing but praise for Almagro in his comments to the press following the meeting, saying that differences between the coup regime and the OAS over Rousseff's ouster had been “overcome.”

Serra has been one of Temer's more visible ministers and has worked to try to convince foreign leaders that the coup was constitutional.