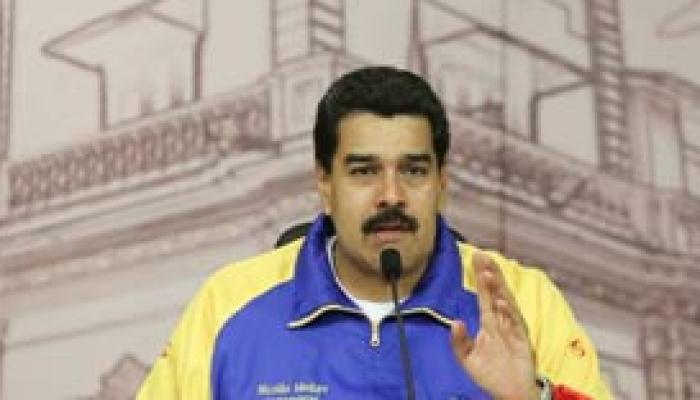 Caracas, October 29 (RHC)-- Venezuelan President Nicolas Maduro has said he is prepared to take more dramatic steps to counter what he deems an “economic war” by his political opponents, calling for a new round of nationalizations of companies engaged in economic sabotage.

“A stopped company, (is) a company recovered for the working class and the revolution. I won't hesitate with respect to that, I will not accept any kind of conspiracy,” said Maduro during a nationwide address. Maduro said: “People here have a need to work and produce and we will not allow a Yankee model of destabilization to install itself here in Venezuela.”

Speculation is growing that the Polar Company, which is the country's largest producer of foodstuffs and beverages, could be seized by the state after Venezuelan officials were seen outside the company's headquarters in Caracas. The head of the Polar Company, Lorenzo Mendoza, was seen attending the opposition demonstration yesterday. Intelligence officers were also reportedly seen outside Mendoza's home in an upper-class part of the Venezuelan capital.

Mendoza, one of Latin America's richest men, has been at odds with the government as his company has been accused of intentionally reducing production of staples, like cornflour, as part of what many call the economic war against the Bolivarian government. His participation in the opposition demonstration is also seen a provocative move, as Mendoza has previously been supportive of dialogue between the government and the opposition and has himself personally met with President Maduro.

The Polar Company has been previously threatened with expropriation after the late President Hugo Chavez accused the company's executives of stockpiling food and speculating with prices.

Several months ago, President Maduro threatened to seize idle factories and followed up his threat with action by nationalizing a factory owned by the Kimberly-Clark Corporation and handing it over to its workers. The factory's previous owners had frozen production after claiming they lacked the raw materials to make its products. However, shortly after the seizure, warehouses belonging to the company were found to be full of raw materials.

The Polar Company has also attributed its reduction in production to a supposed lack of raw materials.