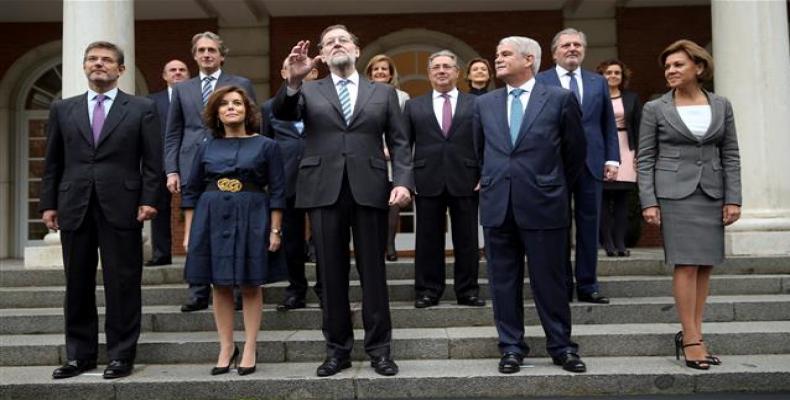 Madrid, November 4 (RHC)-- Spain's Prime Minister Mariano Rajoy has formed a new government for his second term in office, shaking up several portfolios but keeping the ones most crucial to his pro-EU policies intact.

Rajoy named his new cabinet on Thursday, three days after being sworn in following a 10-month political deadlock, during which he acted as prime minister at the head of a feeble government.

The new cabinet includes six new faces, five of them female.  The foreign, interior and defense ministers have all been replaced, however, Rajoy's Economy Minister Luis de Guindos and Labor Minister Fatima Banez retained their posts.

Guindos is credited for helping lift Spain out of an economic crisis with sweeping spending cuts, which were nevertheless met with criticism and mass protests from the public.  He has stressed that more efforts will be required to reduce Spain's deficit as required by the EU.

Banez, the labor minister, also oversaw the implementation of much-criticized labor reforms.  Opposition parties were quick to criticize the new cabinet, which they said was more of the same and would prove incapable of negotiation.

"Those who keep portfolios dealing with some of the most important issues have more than demonstrated that they have zero capacity for dialog," said Socialist party spokesman Mario Jimenez.

Rajoy's Popular Party (PP) lacks an absolute majority in parliament and only has 137 out of 350 seats.  This means the conservative prime minister will have to fight over every bill he wants to put through with the opposition, which is made up of the Socialists and two newly-established center and left parties.

The Spanish Socialist Workers' Party (PSOE) has 90 parliamentary seats. The center-left Ciudadanos has 40 and Podemos has 69.   Rajoy managed to become prime minister only after the PSOE decided to abstain in a crunch parliamentary confidence vote last Saturday, instead of voting against him, as it had during the past 10 months.