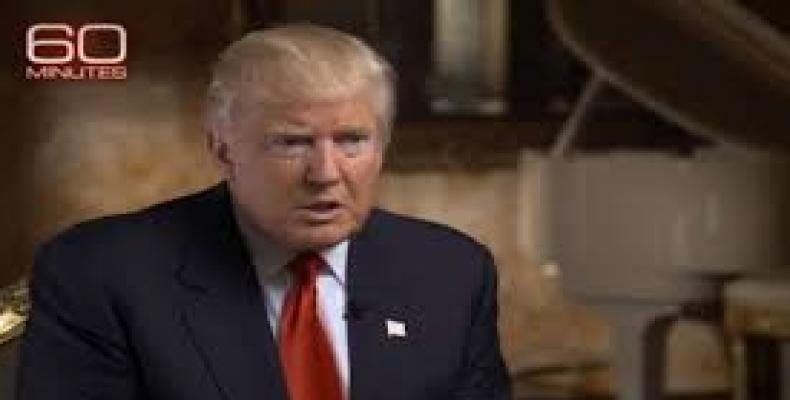 Washington, November 14 (RHC)-- U.S. President-elect Donald Trump has reiterated his plans to deport illegal immigrants, saying he would begin expelling millions of them "immediately" after taking office.  Trump, who will be inaugurated on January 20, said Sunday that approximately two to three million "criminals" will be either deported or jailed when he takes office.

Interviewed on the CBS Television network's program "60 Minutes," Trump said: "What we are going to do is get the people that are criminals and have criminal records, gang members, drug dealers, where a lot of these people, probably two million, it could be even three million.

Referring to his infamous campaign pledge to build a wall on the border with Mexico, the U.S. president-elect said: "A wall is more appropriate" in some areas but "there could be some fencing" too.  Trump said once his administration made sure that the border was "secure," he would begin to make a determination about what to do with the rest of the undocumented immigrants in the country.

Trump has pledged to form a deportation force to push over 11 million immigrant out of America, one of his key objectives that prompted international backlash.  Earlier, in an attempt to ease rising concerns among immigrant families, U.S. House of Representatives Speaker Paul Ryan said that Trump was not likely to forcibly remove immigrants.

Since Trump's election, thousands of protesters have been holding rallies in various cities across the U.S., urging him to resign over his racist and divisive campaign pledges.

Despite reports of unpopularity among Hispanics and African Americans, however, Trump scored a lot better with them than former Republican presidential nominee Mitt Romney, who failed to appeal to minorities in the 2012 election cycle.

Trump was able to clench a historic victory over his Democratic rival Hillary Clinton by winning 290 electoral votes.  The former secretary of state took the popular vote but lost key states and ended the race with 228 electoral votes.