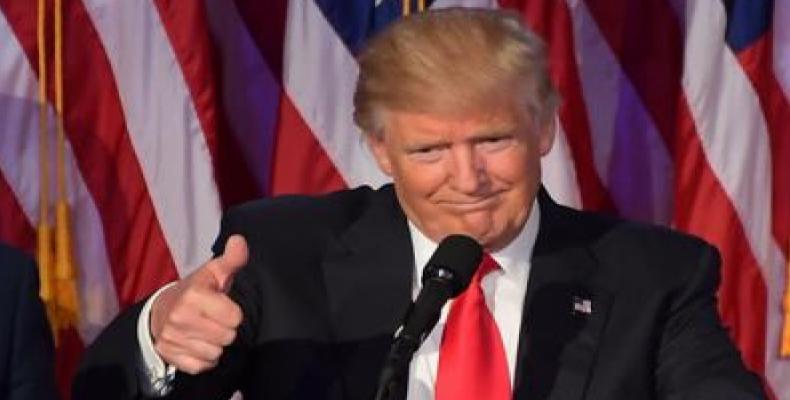 New York, December 29 (RHC)-- U.S. President–elect Donald Trump first voiced alarm that his transition into power is not as smooth as he expected it to be, censuring President Barack Obama for his “inflammatory” statements.  Then, just hours later, he reversed himself, saying that the transition was going "very, very smoothly."

The future president took to Twitter Wednesday to make the new comments in response to Obama’s recent claim that he could have beaten Trump if he could run for a third time.  “Doing my best to disregard the many inflammatory President O statements and roadblocks.  Thought it was going to be a smooth transition - NOT!”

Then, shortly after complaining that Obama’s “roadblocks” had made for a rough changeover of power, he said that Obama phoned him from Hawaii where he is vacationing and that they had "a very nice conversation."

The two men, who had little positive to say about each other on the campaign trail, seemingly buried the hatchet during an Oval Office meeting that took place just days after Trump’s surprising victory in last month’s election.  Obama and Trump have spoken a number of times since then and both expressed interest in a seamless transition between administrations.

Incoming White House press secretary Sean Spicer said Wednesday during the transition team's daily conference call for reporters that "as the inauguration gets closer, both the current president and his team have been very helpful and generous with their time as far as the actual transition, the mechanics of the transition have gone, and I expect them to continue to speak fairly regularly.”

But Spicer also refused to tone down his boss' Twitter rhetoric, telling reporters that the president-elect's social media posts "speak for themselves, I think very clearly."