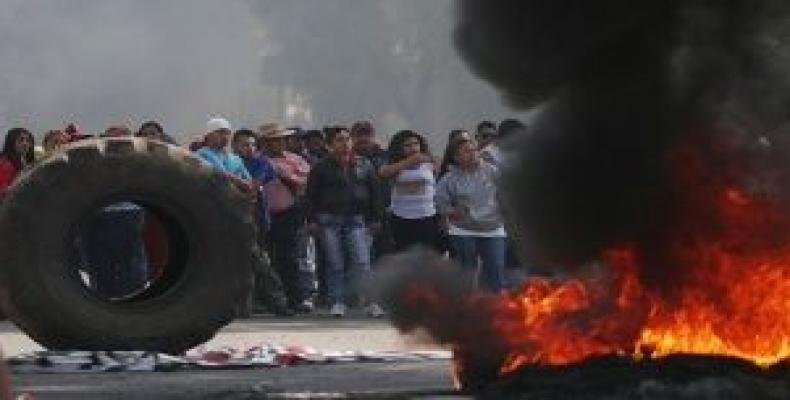 Mexico City, January 6 (RHC)-- The wave of looting and blockades over a double-digit hike in gasoline prices in Mexico has left at least three dead and 250 people arrested as protests continue across the country.

At least 23 stores were ransacked and 27 blockades put up in Mexico City alone, officials said, while the retailers’ association Antad has urged authorities to intervene quickly, saying 79 stores had been looted and 170 forcibly closed due to blockades.

In a failed attempt to calm the widespread anger, President Enrique Peña Nieto told Mexicans that he shared their pain over the fuel price hike that went into effect Sunday, claiming that the alternative would have been even greater costs and more suffering for the country.

Still, Peña Nieto has promised that fuel prices would eventually decrease due to his 2014 energy reform that ended nearly seven decades of sovereign control over energy resources by the state-run oil company Pemex, breaking up its monopoly.

Protesters argue that the government’s decision to raise fuel prices by up to 20 percent has no justification in an oil-rich country.  However, the government insists that the move is in line with international prices and is not a result of the government’s neo-liberal reforms.

Meanwhile, Pemex has denounced blockades on roads that give access to fuel storage terminals and has warned that if the situation continues, it could trigger a crisis of shortages and aggravate the problem.

Pemex also asked angry citizens to avoid any further violent actions, which have already damaged stations and harmed pipeline workers in recent days.  Dozens of terminals across the country have decided to cease operations in fear of possible risks presented by the unfolding movement.

Some have speculated that the looting and vandalism has been led by allegedly "infiltrated" groups, in a move that staunch critics of Peña Nieto's administration claim is intended to create chaos in the country and undermine social protest, setting the basis for the targeting of activists as criminals.

Analysts have warned that if the fuel price increases, which affect both gasoline and diesel, could severely impact the cost of food, transportation and other goods and services.