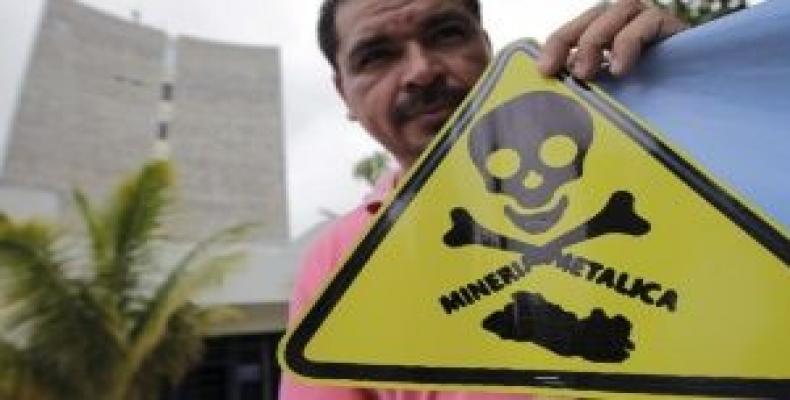 San Salvador, February 7 (RHC)-- The movement against destructive mining activity in El Salvador has received a boost as leaders of the Catholic church in the Central American country presented a bill in Congress aimed at blocking mining and protecting citizens from “serious contamination.”

“The objective of the bill is to protect our country and its population from serious environmental contamination, especially of water, an inevitable consequence of open pit mining exploitation,” the archbishop of San Salvador, Jose Luis Escobar Alas, said during a press conference.

The religious leader of the Catholic-majority country stressed that there must be legislation to outlaw mining in order to ensure the negative consequences are avoided in the future.  Escobar added that he hopes lawmakers support the proposal and propel the bill into law.

But it’s not the first time such a bill has been brought forward in the Congress, and the latest proposal is likely to continue to face an uphill battle in the conservative-dominated assembly.

In 2013, a national coalition against metals mining presented a bill designed to prohibit the activity, but it has still not been discussed in Congress.  Proposed legislation to protect water rights in El Salvador has similarly faced resistance from conservative factions that have long showed staunch support for private interests.

The conservative opposition in the Salvadorean Congress -- made up mostly of the right-wing Arena party that governed the country for two decades until the progressive FMLN won the presidency in 2009 -- has long stalled a proposal to adopt a General Water Law aimed at protecting the right to water and regulating corporate use of the resource.

While the Arena party has moved to curb mining activity in the country in the past, efforts by the FMLN to institutionalize a ban have been unsuccessful.  In 2008, President Antonio Saca, then of the Arena party, implemented a moratorium on new mining concessions.  The move sparked a nearly decade-long, multi-million dollar lawsuit, launched against the country by international mining giant OceanaGold for infringing on its future profits with the ban, which included a decision not to renew the company’s permit to extract gold. El Salvador finally won the David and Goliath battle against the corporation last year.

The moratorium set a powerful precedent for standing up for national sovereignty and clean water against transnational corporate interests.  Nevertheless, efforts by the newly-elected FMLN beginning in 2009 — the same year OceanaGold filed the lawsuit — to turn the moratorium into law have not come to fruition.

Although the law has not been passed, the government has continued to uphold a ban on new mining projects through decree. However, environmental activists and affected communities argue that a more formal law is needed to ensure the long term protection of water resources and the environment.