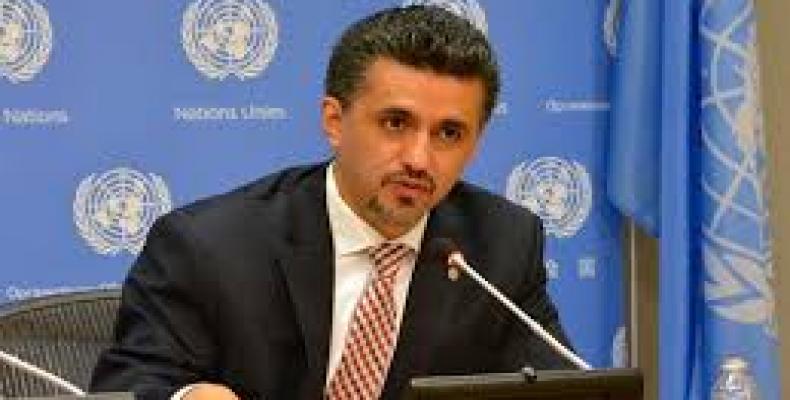 United Nations, April 13 (RHC)-- Bolivia's representative to the United Nations says that the international community owes Haiti a debt and should do whatever it takes to guarantee the Caribbean country all necessary support.

“As for Bolivia, support to Haiti is a priority.  We owe this people a lot, not only because of the environmental disasters but also because of years of foreign intervention,” said Sacha Llorenti after a meeting of the U.N. Security Council debating the presence of U.N. troops in the country.  He also reiterated the responsibility of U.N. troops after the recent pandemic of cholera, saying “apologies are not enough, material compensation is necessary.”

The head of the U.N. Stabilization Mission in Haiti Sandra Honore announced this week that the mission will complete its work in the country in six months, on October 15th, after 13 years of deployment.  The mission will reportedly be replaced with a smaller police operation, which would be drawn down over two years as the country boosts its own force.

The closure of the $346-million mission, recommended by U.N. Secretary General Antonio Guterres, comes as the U.S. looks to cut its funding to U.N. peacekeeping.  Washington is the largest contributor, paying 28.5 percent of the total budget.

Uruguay supported the motion, yet warned, like Bolivia, that the country will need international support more than ever, while China's U.N. Ambassador Liu Jieyi said he supported Guterres' recommendations.

Meanwhile, Deputy Russian U.N. Ambassador Petr Iliichev said: "We see a reason to reconfigure MINUSTAH (the U.N. mission) to the new situation but that has to be done in a most cautious manner.  It's important to prevent a security void and we are convinced that the situation remains quite tenuous."

U.N. peacekeepers were deployed to Haiti in 2004 when a rebellion led to the ouster and exile of President Jean-Bertrand Aristide.  It is the only U.N. peacekeeping mission in the Americas.

Haiti suffered a two-year political crisis until the recent election and inauguration of President Jovenel Moise.  It has suffered major natural disasters, including an earthquake in 2010 and Hurricane Matthew last year.  But the country has not had an armed conflict in years.

U.N. peacekeepers have been accused of sexual abuse and blamed for a cholera outbreak.  Haiti was free of cholera until 2010 when peacekeepers dumped infected sewage into a river.  Some 9,300 people have died and more than 800,000 have fallen ill.

Deputy British U.N. Ambassador Peter Wilson said he was "gravely concerned" about the continued presence of cholera, as he announced the U.K. would give $600,000 to help with the response.

Alexis Lamek, Deputy French U.N. Ambassador, said the time had come to move toward a new U.N. presence in Haiti, "one which is better adapted to the country's needs and the conditions on the ground, which have significantly changed.  The United Nations still has work to do in Haiti," Lamek told the council.