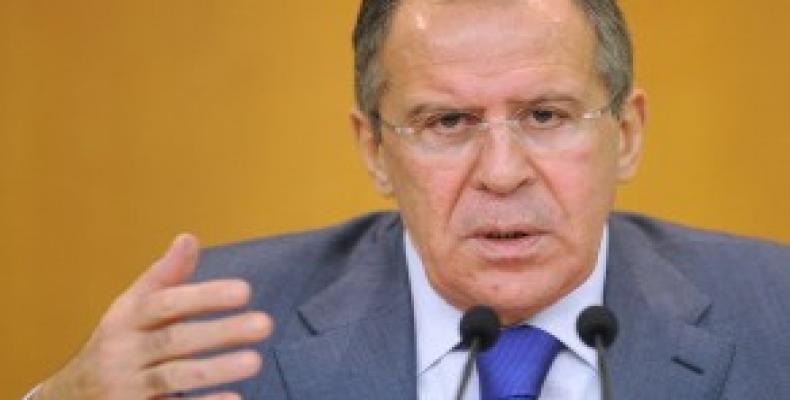 Moscow, April 17 (RHC)-- Russia has warned the United States against any "unilateral action" against North Korea, saying any response to Pyongyang's nuclear activities should not violate "international law," amid reports of potential military confrontation between North Korea and the United States.

Russian Foreign Minister Sergei Lavrov made the remarks at a news conference in Moscow on Monday, a few hours after U.S. Vice President Mike Pence said the era of "strategic patience" with the North was over, warning Pyongyang not to test U.S. President Donald Trump’s resolve over North Korea's nuclear and ballistic missile programs.

“This is a very risky path.  We do not accept the reckless nuclear missile actions of Pyongyang that breach UN resolutions, but that does not mean that you can break international law,” Lavrov said, adding that he hoped there would not any "unilateral actions like the one we saw recently in Syria.”

The Russian top diplomat was referring to the recent U.S. attack on the Shayrat Airfield in Syria's Homs Province with a barrage of 59 Tomahawk missiles, fired from two warships in the Mediterranean Sea, which caused some 15 fatalities, including civilians.  The Pentagon's unprecedented offensive on the Syrian soil was conducted without any international authorization.

On Sunday, the U.S. and South Korean military officials reported that Pyongyang's latest missile test has failed, earlier in the day, with the projectile exploding almost immediately after the launch.

The failed test occurred just a few hours before Pence's scheduled visit to South Korea's capital of Seoul and just one day after Pyongyang showcased its submarine-launched ballistic missiles (SLBMs) for the first time during a massive military parade.

During recent weeks, tensions between North Korea and the US have increased, raising fears of a potential military confrontation between the two sides.  Washington has voiced concerns over Pyongyang’s tests, but the North says such launches are an act of deterrence against a potential invasion by the U.S. or South Korea.