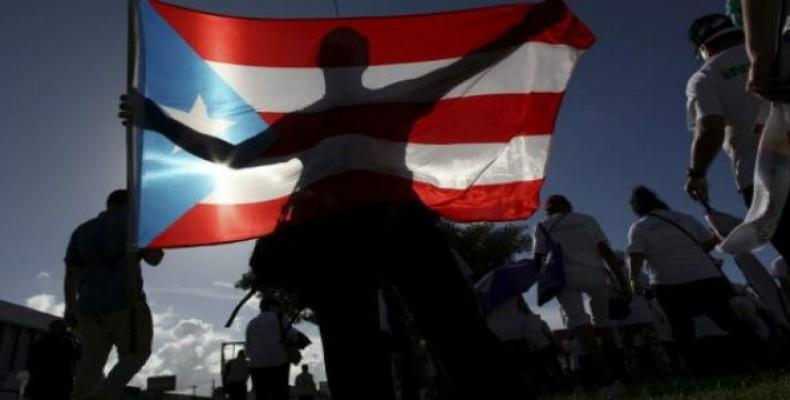 San Juan, May 9 (RHC)-- Students from the University of Puerto Rico have held a national demonstration to protest widespread austerity measures and an increase in police violence against those who oppose such measures.

Student organizers describe the demonstration as being against the persecution and criminalization of student struggles for affordable education.  However, a much broader debate was held about widespread austerity measures aimed at alleviating the Caribbean island's debt crisis.

Last week, Puerto Rico announced that it would restructure its public debt.  The island's bankruptcy claim could reach a historic $3.8 trillion in the municipal bond market.  It wasn't clear just how much of the nation's $70 billion debt would be included in the bankruptcy filing.

The move comes after several U.S. creditors, as well as hedge funds dubbed “vulture funds," sued Puerto Rico for defaulting on bonds.  Protesters have taken aim at the island's Fiscal Control Board, which was established by the U.S. Congress' PROMESA bill to oversee government expenditures. The unelected board, having assumed power in January, is pushing for grave austerity measures.  One of the measures include a $512 million cut in university funding by 2025.

According to reports by the Debt Audit Commission and Saqib Bhatti and Carrie Sloan of the ReFund America Project, roughly $36.9 billion of Puerto Rico's debt was deemed illegal.  The amount owed to creditors either involved “extra-constitutional” debt saddled with predatory interest rates or “toxic” interest-rate swaps.

Bernard Tort, a University of Puerto Rico professor who was attacked with pepper spray by riot police during a recent protest, said that he lost his sight for 40 minutes.  Along with a majority of students and professors, Tort supports an independent audit of the debt.

“The audit would reveal 1) how much of the debt is illegal, 2) who is responsible for putting together the illegal bonds that were sold, and 3) who was involved in the underwriting,” he said.