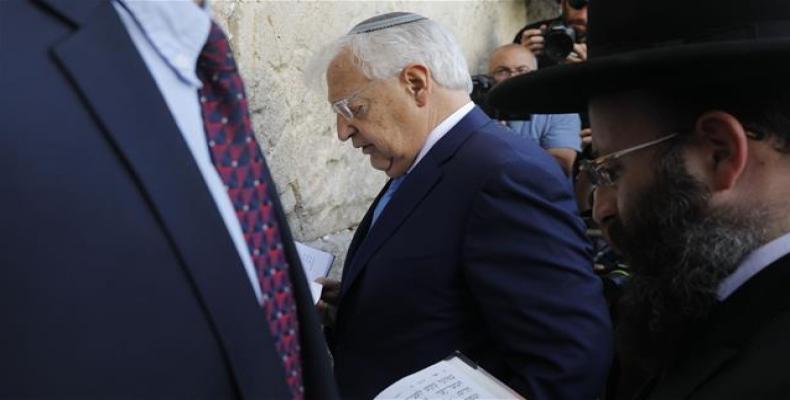 Tel Aviv, May 16 (RHC)-- David Friedman, a strong proponent of Israel’s illegal settlements in the occupied Palestinian land, has arrived in Israel as the new U.S. ambassador to the Tel Aviv regime.  The Israeli foreign ministry confirmed the arrival of Friedman on Monday, days ahead of a visit by U.S. President Donald Trump.

Friedman, who once served as Trump's bankruptcy lawyer, is critical of the two-state solution to the Israeli-Palestinian conflict and supports Israel’s illegal settlement activities on the occupied territories.  The 58-year-old presents his credentials to Israeli President Reuven Rivlin in Tel Aviv.

Friedman has also backed the idea of moving the U.S. embassy from Tel Aviv to East Jerusalem.  “I intend to work tirelessly to strengthen the unbreakable bond between our two countries and advance the cause of peace within the region, and look forward to doing this from the U.S. embassy in Israel’s eternal capital, Jerusalem,” he said in a statement following his nomination in December.

Friedman, a son of an Orthodox rabbi with no previous political experience, has argued that the pursuit of a Palestinian state is a “damaging anachronism.”  Israeli Prime Minister Benjamin Netanyahu has welcomed Friedman's appointment.

Donald Trump is scheduled to visit Israel and the occupied Palestinian territories on May 22nd and 23rd.