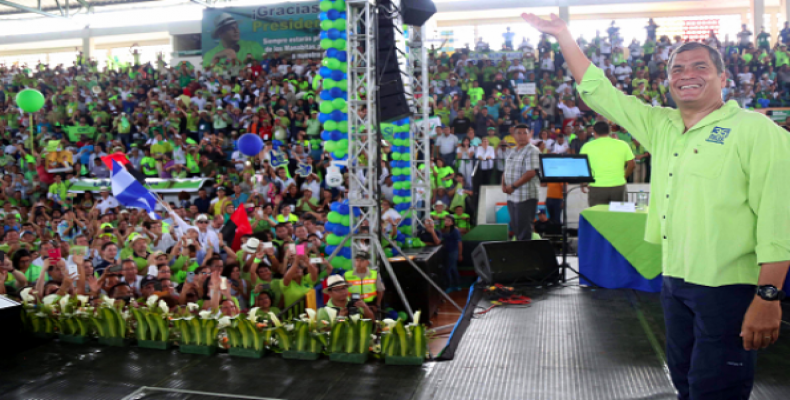 Quito, May 20 (RHC)-- Ecuadorean President Rafael Correa is set to leave office next Wednesday, May 24th, with a 62 percent approval rating, according to the newspaper El Telegrafo, citing new findings from a survey conducted by Public Opinion Ecuador.

The survey, conducted between April 22 and 24, found that Correa’s approval rating never fell below 50 percent.  Approximately 2,270 people aged 16 and over were chosen randomly across the country for survey interviews.

Correa, who took office in 2007 representing the leftist Alianza Pais party, is considered to be one of Ecuador’s most popular presidents.  In 2014, his approval rating peaked at 83 percent.  “It's an interestingly high rating after so much time,” Public Opinion Ecuador Director Santiago Perez told El Telegrafo.

Correa’s strongest base, according to Public Opinion Ecuador, is centered along the country’s Pacific coast.  This is the same area that overwhelming voted in favor of President-elect Lenin Moreno and Alianza Pais.

Since 2007, Correa’s Alianza Pais party has presided over Ecuador’s Citizens’ Revolution, a mass movement that has empowered workers, Afro-Indigenous groups and the LGBTI community.

His administration has not only doubled the country’s minimum wage.  It has also lifted over one million people out of poverty, doubled spending on healthcare and education, established sources of clean energy and slashed unemployment to 4.3 percent as of last year.