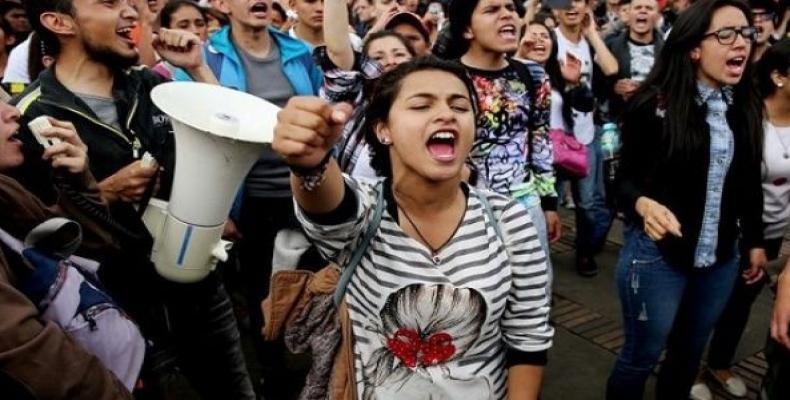 Bogota, June 2 (RHC)-- Colombia’s national teachers’ strike continues as tens of thousands of education workers continue to pressure the government to respond to their demands for better working conditions, higher salaries and greater investment of resources in public education.

In the latest mass job action, some 300,000 teachers took to the streets to call attention to education issues in major cities across the country, including Bogota, Cali, Medellin, Bucaramanga, Barranquilla and others.

“The main task of the teachers’ strike is to win resources for education for dignity,” said Carlos Rivas, the president of the country’s main teachers’ union, the Colombian Federal of Education Workers or Fecode, on his Twitter account during the marches.

Teachers, who launched the indefinite strike on May 11 after talks with the government stalled, have criticized President Juan Manuel Santos’ administration for failing to meet fundamental needs in the public education system despite claiming to champion a plan to make Colombia the “most educated” country in Latin America.

Unions have stressed that the job action isn’t only about raising teachers’ pay, but also improving the quality of public education.

Fecode announced on its Twitter account Wednesday that teachers will continue the strike and that “stronger actions are being prepared.”

The strike has affected eight million students across Colombia, but union leaders report that students and parents are increasingly supporting the movement for better quality education.