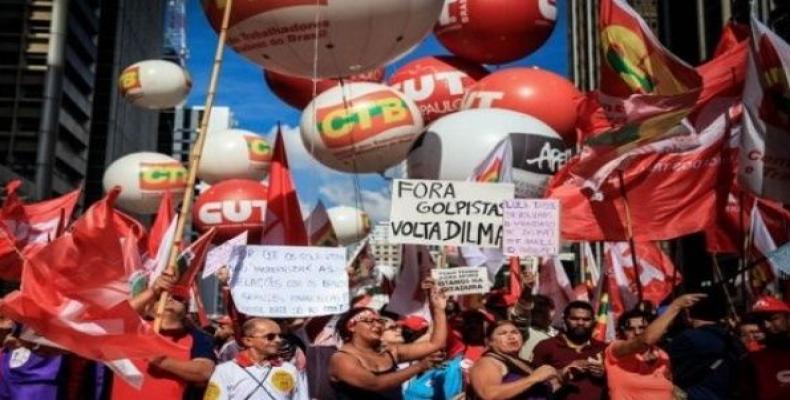 Brasilia, June 16 (RHC-teleSUR)-- The headquarters of Brazil's trade unions has issued a call for a new general strike to shut down Brazil's largest cities on June 30th.  The strike will protest neo-liberal labor and retirement pension reforms, as well as demand the resignation of unelected president Michel Temer who is currently embroiled in corruption controversies.

The secretary of the Central Worker's Union (CUT) Sergio Nobre said
that the reforms and austerity measures are against the will of the Brazilian people and will not be accepted without a fight.

The austerity measures proposed by Temer would raise the minimum age to retire and collect pension to 65 years.  While international organizations such as the International Monetary Fund (IMF) have supported Temer's neo-liberal policies as being conducive to economic growth, the policies have been widely protested and condemned as harmful to the interests of the poor and working classes.

The proposal also comes in the midst of a massive wave of layoffs. Unemployment has reached a record high of 13.6%, or 14 million Brazilians without jobs.

In late April, over 35 million Brazilians participated in a general strike called by CUT to protest the economic austerity of Temer.