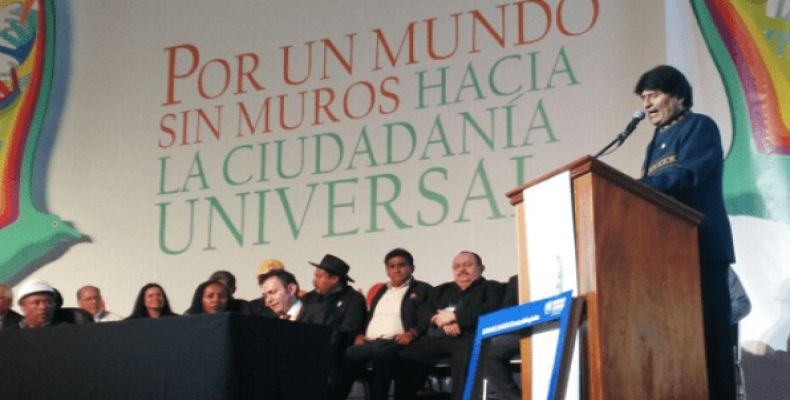 Cochabamba, June 21 (RHC)-- Bolivian President Evo Morales launched the World Peoples' Conference for a "World Without Walls" Tuesday in Cochabamba, calling for an end to anti-immigrant discrimination and hate around the globe and respect for the right of all people to the benefits of citizenship status.

"In Latin America, invasions and colonization have imposed borders upon us," Morales said.  "An illegal human being cannot exist in the world — a human being without community, without freedom, without citizenship."  And he continued: "Walls are an attack against humanity.  Walls don't protect."

Kicking off the two-day conference promoting the creation of a world without borders and walls, the Bolivian president also called for social movements around the planet to unite in the fight against capitalism.  His comments combatted anti-immigrant rhetoric that has scapegoated economic challenges on migrants, calling attention instead to the systemic injustices of the global economic system.

"Immigrants are not responsible for the economic crisis in the powerful nations," he said.  "It is the concentration of wealth in the hands of few."

Under the banner "For a world without walls, toward universal citizenship," the conference began on World Refugee Day Tuesday with an implicit critique of U.S. President Donald Trump's xenophobic policies, epitomized in his chief campaign promise of building a massive wall along the 1,954-mile border with Mexico.

Central themes to be discussed during the two-day conference include "the structural and systemic causes of human movement from one state to another," as well as the "impact of climate change, economic crisis, wars and interventionist politics on migratory flows," according to the event's website.

The summit will also explore strategies for protecting the rights of migrants and refugees and put forward proposals for working toward the creation of "a universal citizenship articulating the plural identities of peoples and the sovereignty of states."

The conference, attended by a number of international invitees, including former Ecuadorean President Rafael Correa, will be broken down into five work groups to tackle the various issues on the agenda and put forward proposals.