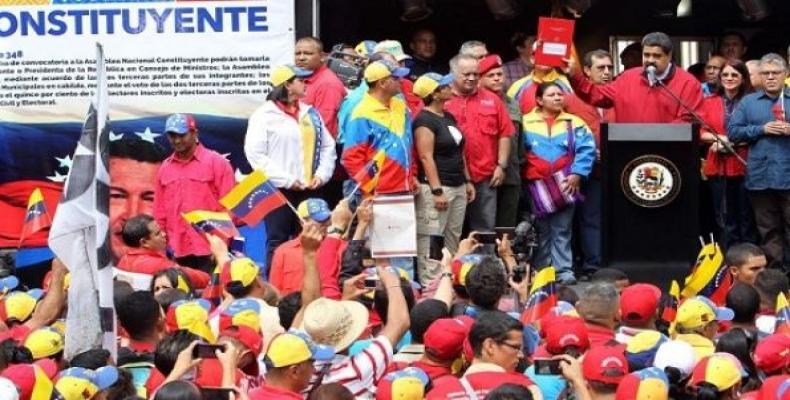 Caracas, June 22 (RHC)-- Several key figures of the government of Venezuelan President Nicolas Maduro will be candidates for the country's National Constituent Assembly, called by the president to tackle the economic and political situation in the country.

Delcy Rodriguez, who has been the country's foreign minister since December 2014, resigned Wednesday to be able to participate as a candidate for the Constituent Assembly.  "She has defended Venezuela's peace, sovereignty and independence like a tiger," Maduro said about Delcy Rodriguez.

Samuel Moncada, the current ambassador to the Permanent Council of the Organization of American States and head of the Presidential Commission to the Non-Aligned Movement, will be the new foreign minister.

Maduro said Moncada will "maintain the fight for the truth of our country" against what Caracas has slammed as a concerted OAS campaign, driven by the United States, to intervene in the country with attacks against the Maduro government.

Francisco Torrealba, former minister of labor, will also be a candidate for the Constituent Assembly, as well as Maduro's former chief of staff Carmen Melendez and Venezuela's First Lady Cilia Flores.   Nestor Ovalles will replace Torrealba as labor chief and Carlos Osorio will replace Melendez as chief of staff.

The National Electoral Council published on Wednesday the list of candidates that will run to be members to the Constituent Assembly.  The representatives will be democratically elected on July 30th.

At least 52,000 candidates put their names forward to contest 545 seats in the Constituent Assembly, made up of both sectoral and regional representatives.  Of the 545 representatives, 364 will be territorial, eight Indigenous and 173 from different sectors, including 79 representatives for workers, 28 for retirees, 24 for students, 24 for community councils, eight for farmers and fishermen, five for the business sector and five for people with disabilities.

The Venezuelan opposition demanded a National Constituent Assembly in 2013, but now the same political leaders reject the process and insist on calling protests against the government, which over the past two and a half months often have turned violent, leading to the deaths of at least 85 people.

Parts of the political opposition have called for Venezuelans to rebel and reject the Constituent Assembly, saying they won't run candidates to be part of the process.