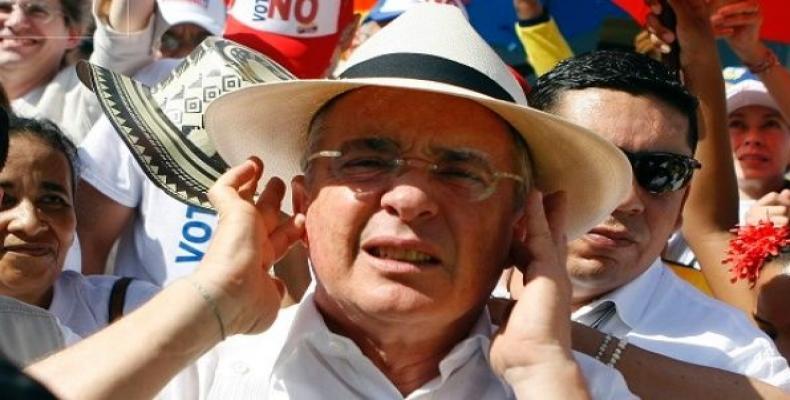 Bogota, June 26 (RHC-teleSUR)-- Even as Colombia’s largest guerrilla army is laying down the last of its weapons once and for all, the country’s far-right former President Alvaro Uribe remains unwilling to give peace a chance after over half a century of civil war, vowing to roll back the historic peace accords with the FARC is his party wins next year’s elections.

Uribe, who as president from 2002 to 2010 presided over record-level human rights abuses and number of people fleeing Colombia as refugees, has been the country’s staunchest opponent of the landmark peace deal.

The controversial, right-wing politician has long argued that the accords -- signed last year by President Juan Manuel Santos and FARC leader Rodrigo Londoño, also known as Timoleon Jimenez or Timochenko -- offer an “impunity” deal to the FARC by prioritizing truth and reconciliation over criminal prosecutions for demobilized members of the rebel force.

“The accords will not be eliminated, they will be modified,” Uribe, a senator with the right-wing Democratic Center party said, arguing that what he described as “impunity” for the FARC will give way to more violence.

Uribe was the chief proponent of the “No” campaign in last year’s plebiscite on the peace agreement, which Colombian voters rejected by less than half a percentage point.  A modified version of the peace deal was later approved by Congress.

The former president has advocated for an end-of-conflict deal that would see former FARC rebels put behind bars for their crimes and blocked from participating in politics.  He staunchly rejected the peace agreement’s transitional justice measures that offer reduced sentences and community service for armed actors who own up to their crimes, sticking by his characterization of FARC members as criminals and terrorists.

Uribe has also been a fierce opponent of the political participation agreements outlined in the peace deal that will grant the FARC non-voting representation in Congress until the 2018 election, when it will debut as a political party with five seats guaranteed both in the lower house of Congress and the Senate.  Uribe argued the measures of the deal afford FARC rebels “excessive benefits.”

Supporters of the peace deal argue that agreements on political participation, alongside the other five pillars of the peace accords, are essential for bringing an end to over five decades of internal armed conflict and ensuring that a war of ideas in party politics — not weapons — define Colombia’s political future.

Nevertheless, Uribe has continued to double down on his rejection of the deal, arguing that former FARC rebels are not “eligible” to participate in politics and fear mongering that their involvement in governing the country would have a negative impact on the economy and “create a second Venezuela.”

Whipping up opposition to agreement in the final months of the peace negotiations last year, Uribe said in an interview with Colombia’s El Espectador that it was cause for “panic” that Santos “has said that (FARC leader) Timochenko could be president.”  The fact-checking website Colombiacheck labeled the statement “inflated,” pointing out that Uribe failed to put in context Timochenko’s complicated legal situation in the face of dozens of investigations, the FARC’s low approval rating among Colombian voters, and the international precedent of El Salvador, where it took decades for a former guerrilla leader to win the country’s top office.

But despite being misleading, the comments were emblematic of the kind of misrepresentations of the peace deal and anti-FARC hysterics that has characterized Uribe’s high-profile criticism, including during the “No” campaign against the peace deal ahead of the November 2016 plebiscite.

And while Uribe has warned that “impunity” for the FARC could birth further violence as the 52-year-old civil war comes to a close, human rights defenders have long warned that the greatest threat to security and the stability of the peace deal in the country is the resurgence of right-wing paramilitary activity.

Both the Santos government and Uribe’s far-right faction have turned a blind eye to paramilitary violence, labeling the death squad syndicates “criminal gangs.” The characterization, pioneered by Uribe when he was president, effectively depoliticizes the violence of paramilitaries and downplays their role in a spiral of targeted attacks and violent harassment of mostly poor, rural communities.

Uribe has also been accused of links to right-wing paramilitary groups and also oversaw the “false positives” scandal. The shocking scandal broke in 2008, revealing systematic extrajudicial military killings of civilians, including homeless and mentally ill people, and dressing them in guerrilla fatigues to boost the government’s body count in the war on rebels.  More than 3,000 people were killed as “false positives” during Uribe’s two terms in office.

Paramilitary groups are said to be responsible for at least 80 percent of civilian deaths in the country’s more than half-century-long civil war that has claimed the lives of some 260,000 people and victimized millions more.