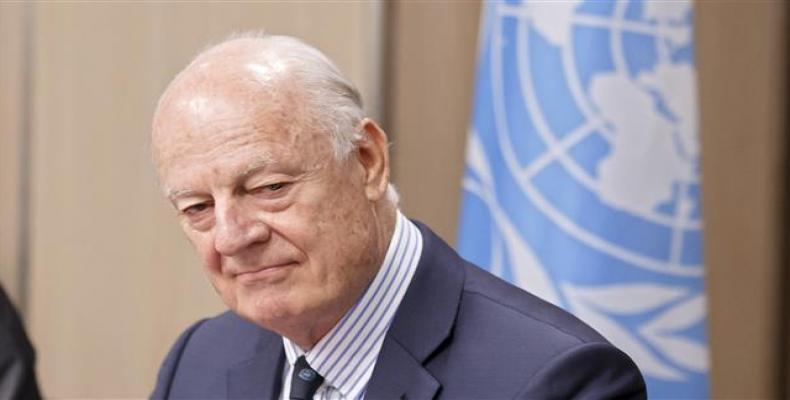 Geneva, July 11 (RHC)-- United Nations Special Envoy for Syria Staffan de Mistura has stressed that the de-escalation process in Syria must not affect the country’s sovereignty.  De Mistura made the comments during a press conferences held on the sidelines of the latest round of Syria peace talks held in Geneva on Monday.

The UN representative pointed out that negotiations were currently being held in Amman to monitor implementation of a ceasefire in southwest Syria brokered by the U.S. and Russia.  The trilateral agreement on the cessation of hostilities was announced on Friday after a meeting between Russian President Vladimir Putin and his U.S. counterpart, Donald Trump, on the sidelines of the G-20 summit in the German city of Hamburg.

"When two superpowers ... agree fundamentally at that level in trying to make that ceasefire work, there is a strong chance that that will take place," he said, adding that the truce was broadly holding.  He also noted that the last round of peace talks held in the Kazakh capital Astana last week had produced suitable results in the “right direction."

The UN envoy said that he was not expecting a specific breakthroughs in this round of talks, but “there is a higher potential than we are seeing in the past for progress."

The last round of the UN-brokered talks in Geneva was held in May, and those talks have made relatively less progress compared to the Astana talks.

Syria has been beset by conflict since March 2011.  Numerous rounds of talks and three different UN special envoys have failed to resolve the crisis which has claimed the lives of hundreds of thousands of people.