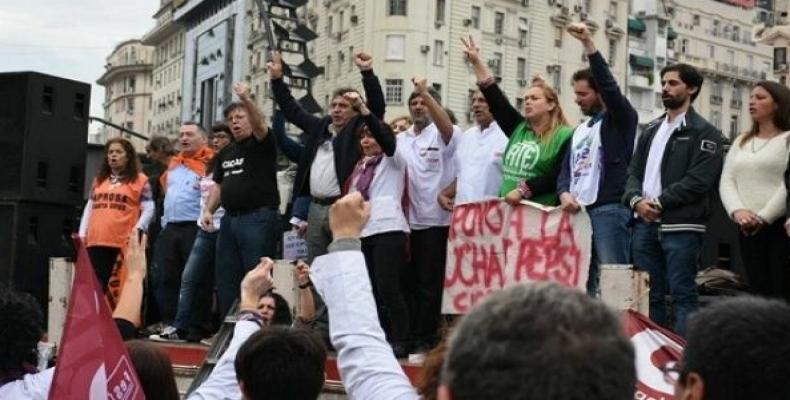 Buenos Aires, July 17 (RHC)-- Workers from the health sector in Argentina are on strike to protest against the lack of funding and unfavorable working conditions in Buenos Aires under the government of President Mauricio Macri.  "We made a strong complaint to the provincial government and the new health minister, demanding an urgent hearing to be able to put on the table the issues that impact health professionals and the population," Pablo Maciel of the Trade Union Association of Health Professionals of the Province of Buenos Aires told reporters.

Doctors, nurses and hospital staff put up a mobile tent at the city's famous obelisk to demand that provincial governor and Macri ally Maria Eugenia Vidal address budget problems in Buenos Aires hospitals.  "This is a system that is underfunded and that is expressed in the miserable wages that are causing us to resign, because with these salary levels, the province can't retain its staff and fails to cover vacancies," union member Pablo Torres said.

Meanwhile, the General Confederation of Labor announced they will hold a national strike against Macri on August 22nd with the support of health and medical unions.  The march is scheduled to begin nine days after the parliamentary elections, which is set for August 13th.  Former Argentinean President Cristina Fernandez has a wide lead in polls for her Senate election bid against conservative candidates backed by Macri.

Cristina Fernandez has announced the formation of a new political alliance called “Citizen's Unity” that looks to form a broad coalition of parties against the neo-liberalism of Macri's administration.