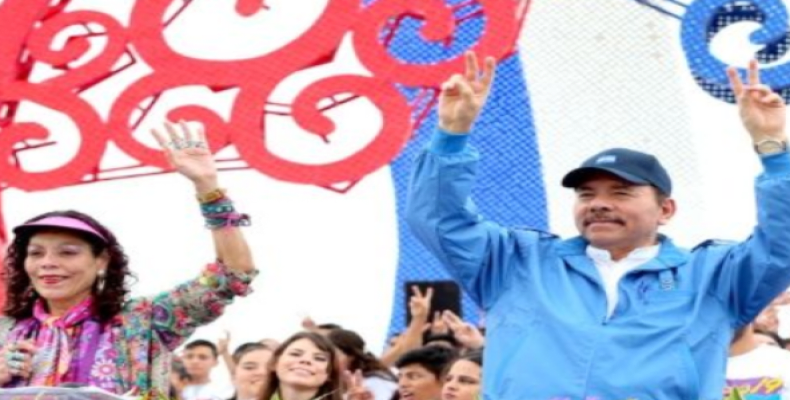 Managua, July 20 (RHC)-- Official commemorations to mark the 38th anniversary of the Sandinista victory over dictator Anastasio Somoza were held yesterday in Managua, the Nicaraguan capital.  A number of regional leaders attended the event, including Bolivia's President Evo Morales and Cuba's First Vice President Miguel Diaz-Canel.  The Secretary General of the Association of Caribbean States, June Soomer, and the head of the National Council of the Saharawi Arab Republic, Jatri Adouh also attended the commemorations in the Plaza de la Fe in Managua.

"We are here to share our struggle for the defense of democracy in these very difficult times in the face of the crisis of the capitalist system," Evo Morales said, adding that "the aggression against Cuba and Venezuela is an aggression against all of Latin America, a provocation to life itself and the whole of humanity."

"We are here to accompany this anniversary of the Revolution, 38 years of building peace, building development, building progress.  Nicaragua is a symbol for Latin America in how to advance in the fight against poverty and inequality.  Sandino and Farabundo are two symbols, not only for Central America but for Latin America in the fight against the empire," said Salvadorean President Salvador Sanchez Ceren.

"The triumph of the Sandinista Revolution accelerated the unity of the revolutionary forces in El Salvador.  From that triumph, the Farabundo Marti Liberation Front was created, initiating a process to build peace," he added. "We have had eight years of governing El Salvador and we have begun a long process of social, economic transformation to combat poverty and guarantee the best levels of education and health."  The Salvadorean leader also greeted the representatives of leftist political parties in Nicaragua currently attending the Sao Paulo Forum, emphasizing his support for the elections that will be held later this month in Venezuela for the National Constituent Assembly convened by President Nicolas Maduro.

Nicaraguans gather every July 19 to celebrate the anniversary of the Sandinista revolution that toppled the dictatorship of the U.S.-backed Somoza dynasty in 1979.  Some of the achievements under the current Sandinista administration include poverty reduction, sustained economic growth and support for social programs across the country.  According to the Economic Commission for Latin America, Nicaragua ranks second among Latin American countries in reducing inequality.  Due to its literacy campaign, UNESCO declared Nicaragua free of illiteracy in 2009.

Daniel Ortega was first elected president in 1984, but after the devastating effects of an economic siege and the contra war financed and organized by the United States, the FSLN lost the 1990 elections to right-wing forces.  The Sandinistas returned to power in 2006 and Ortega has been president ever since, winning two more elections in 2011 and 2016.