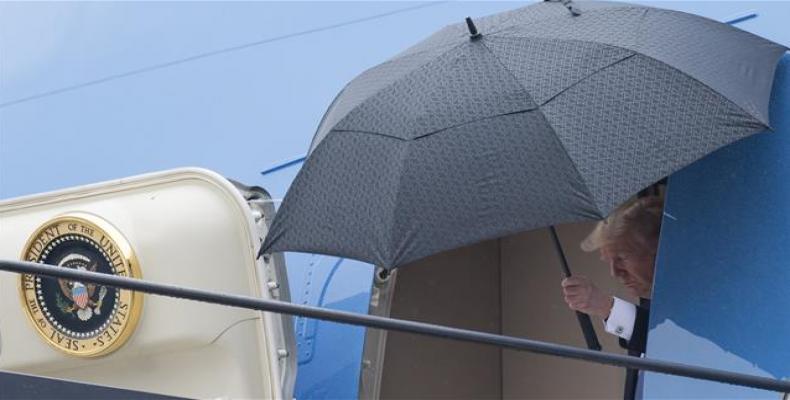 Washington, July 25 (RHC)-- U.S. President Donald Trump has asked to make a “dummy” visit to the UK before accepting British Prime Minister Theresa May’s invitation for a full state visit.  The low-profile visit, which if true is likely to be arranged sometime before the end of the year, would lack the royal pomp of a state visit, The Daily Mail reports, citing a senior diplomat.  “A low-profile trip followed by a formal State one is among the ideas being considered,” the official told the daily.

May extended Queen Elizabeth II’s invitation to Trump during a visit to the White House only a week after Trump's inauguration on January 20th.  Trump has delayed the visit so far out of fear that widespread protests would embarrass him and the royal family, the report added.  Recent surveys have found that more than half of people in the UK believe Trump is a threat to global stability.

The British prime minister has complied with all of Trump’s requests so far in a bid to avoid upsetting him.  The embattled prime minister, whose position is already weakened after the June general election, has big plans for a possible trade deal with the U.S. that could guarantee her position after Britain’s exit from the European Union.

The alleged decision to downgrade the trip would go down well with millions of Britons who protested the state visit in an online petition.  It would also please major political figure like Labour Leader Jeremy Corbyn and London Mayor Sadiq Khan, who both have called for the trip to be scrapped.

Corbyn has called Trump a “threat” to the world and said he should not be allowed in to Britain because of his “reckless” policies, specifically his ill-fated visa ban against people from several Muslim countries.