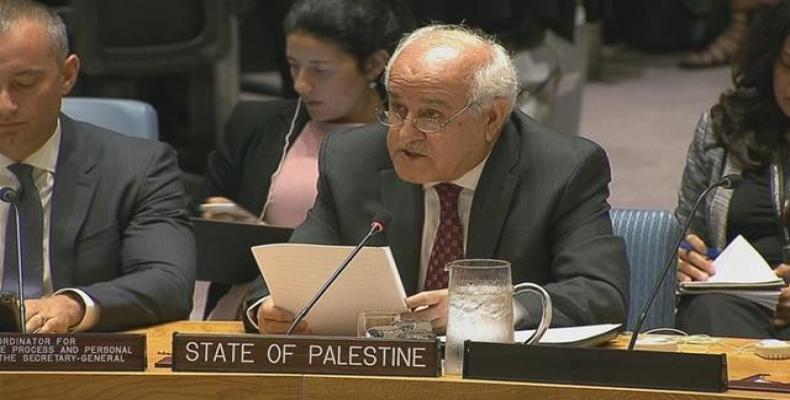 United Nations, July 26 (RHC)-- The Palestinian ambassador to the United Nations Riyad Mansour has urged UN action against Israel's “reckless and destructive agenda” across the occupied Palestinian lands.  The envoy told the Security Council on Tuesday that the al-Aqsa Mosque compound crisis was at a "tipping point," urging the council members to help protect Palestinians and their holy sites from Israel's agenda.

"We are clearly at the tipping point," Mansour said in his speech to the 15-member council, adding: "We must therefore again warn against the dangers of such provocations and incitement, and fuelling of yet another cycle of violence which will surely have far-reaching consequences."

Mansour also warned that "the stoking of a religious conflict is rapidly unfolding as Israel persists its illegal actions in occupied East Jerusalem."  Elsewhere in his remarks, the Palestinian envoy also accused Israel of "aggressive behavior and provocative violation" of the historic status quo at the Muslim-administered al-Aqsa Mosque compound.

Earlier on Tuesday, Israeli officials removed metal detectors that had been installed in and around al-Aqsa Mosque only to replace them with smart cameras at the holy site.  Palestinian officials have rejected Israel’s moves in the occupied East Jerusalem, saying Tel Aviv should lift all restrictions on the compound.

The Israeli security cabinet made the decision following talks between Prime Minister Benjamin Netanyahu and Jordan’s King Abdullah, who is the official custodian of the Haram al-Sharif mosque.

Meanwhile, Muslim clerics who oversee the holy site told Palestinians to keep away from the mosque as long as the cameras remain in place.  Israel’s decision to install the metal detectors triggered a fresh wave of violence in East Jerusalem.  The unrest took the lives of four Palestinians and three Israelis on Friday and Saturday.

In reaction to the events, the clerical body that runs the Islamic sites in the compound decided to boycott daily prayers at the mosque and told worshippers to pray in nearby streets.

The occupied Palestinian territories have witnessed new tensions ever since Israeli forces introduced restrictions on the entry of Palestinian worshipers into the al-Aqsa Mosque compound in East Jerusalem in August 2015.

More than 300 Palestinians have lost their lives at the hands of Israeli forces in tensions since the beginning of October 2015.