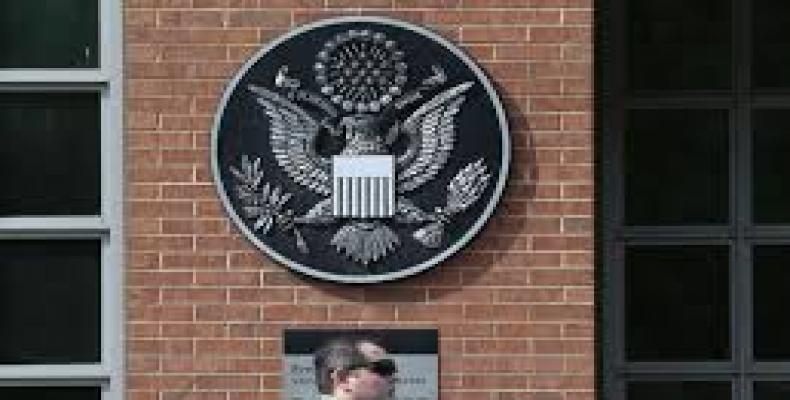 Moscow, July 31 (RHC)-- Russian President Vladimir Putin has said that 755 U.S. diplomats must leave the country as a result of Washington’s own policies.  "The American side has made a move which, it is important to note, hasn't been provoked by anything, to worsen Russian-U.S. relations.  [It includes] unlawful restrictions, attempts to influence other states of the world, including our allies, who are interested in developing and keeping relations with Russia," said Putin during an interview with the Rossiya 1 TV channel on Sunday.

Earlier in the week, after the U.S. Congress approved new sanctions against Russia, Iran and North Korea, the Russian foreign ministry announced that Moscow had informed Washington that its diplomatic staff in Russia must be reduced to 455.

Russian Deputy Foreign Minister Sergey Ryabkov says Moscow and Washington must “start anew or everything will be in tatters.”  "We've been waiting for quite a long time that maybe something would change for the better, we had hopes that the situation would change.  But it looks like, it's not going to change in the near future... I decided that it is time for us to show that we will not leave anything unanswered," he added.

Putin noed that there are “important spheres of cooperation" between the U.S. and Russia which he hoped would not be hurt by Washington's anti-Russia policies.  He stressed that both countries had recently obtained "concrete" results in de-escalating the situation in Syria, which has been has been fighting different foreign-sponsored militant and terrorist groups since March 2011.  UN Special Envoy for Syria Staffan de Mistura estimated last August that more than 400,000 people had been killed in the crisis until then.

"The main thing is, that we have a multi-faceted cooperation in many fields. Of course, Moscow has a lot to say and there is a number of spheres of cooperation that we could potentially cut and it would be sensitive for the U.S. side. But I think we shouldn't do it. It would harm development of international relations. I hope it won't get to that point. As of today, I'm against it," he noted.

Shortly after Putin’s announcement, Washington released a statement slamming Russia’s move to expel the diplomats, noting that it is weighing a suitable response.  “This is a regrettable and uncalled for act…We are assessing the impact of such a limitation and how we will respond to it," read the statement.