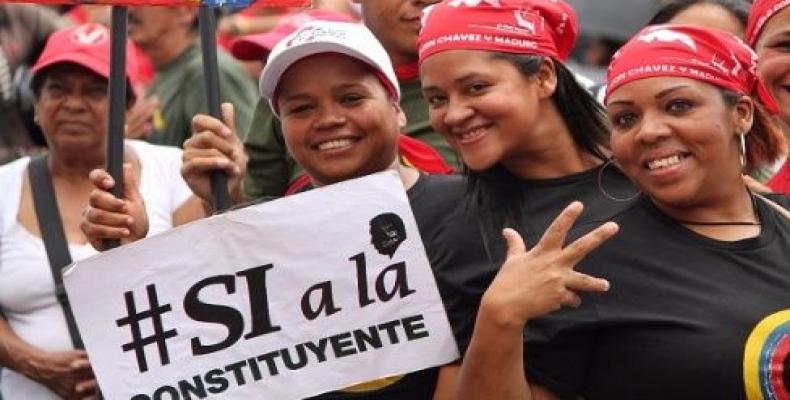 Caracas, July 31 (RHC)-- The president of Venezuela's National Electoral Council Tibisay Lucena has announced that turnout in the country's historic National Constituent Assembly was over 41 percent, indicating that over eight million people voted in the elections on Sunday.

"Peace has won.  If peace has won, Venezuela has won," she said at a televised press conference.  "Despite the violence and threats, Venezuelans were able to express themselves."

Lucena said the CNE had to relocate some voting centers to avoid violence, and that on Tuesday the Indigenous communities will choose their eight remaining representatives.

President Nicolas Maduro spoke to a large crowd in Caracas and thanked them for their support to reach peace in the country.  Maduro said it was one of the highest voter turnouts of the Bolivarian Revolution with 8,089,320 voting for their representatives

"Eight million in the middle of threats, there were states where they crossed rivers and mountains, and they voted," Maduro said.  "The people of Venezuela have given a lesson on democracy,” President Maduro said.

Maduro thanked Latin American and the Caribbean countries for their support against what he called interventionist moves by the United States.  Referring to President Donald Trump's promise that he would not accept the results of this election, Maduro said: “We don’t care what Trump says, we care about what our people say.”

"This election will mark the future years of the independence of Latin America," Maduro said.  "Latin America will begin a new wave of struggle."

The Venezuelan president repeated that the first step before the legislative body begins the Constituent process will be to call, yet again, for a dialogue with the right-wing opposition in the country. Maduro also called on the opposition to abandon violence and return to doing politics.

Voting hours were extended by one hour due to the overwhelming response, as hundreds of thousands of Venezuelans from across the country lined up long before dawn to cast their ballots for the 545 candidates.

The voting process has been peaceful with the exception of a few isolated incidents of violence as opposition supporters protested and staged demonstrations in a bid to shut down the election.

A feeling of excitement filled the crowds in the center of Caracas, as citizens sang, danced and laughed after the end of the process to choose their delegates to the legislative body that will draft the new Constitution.