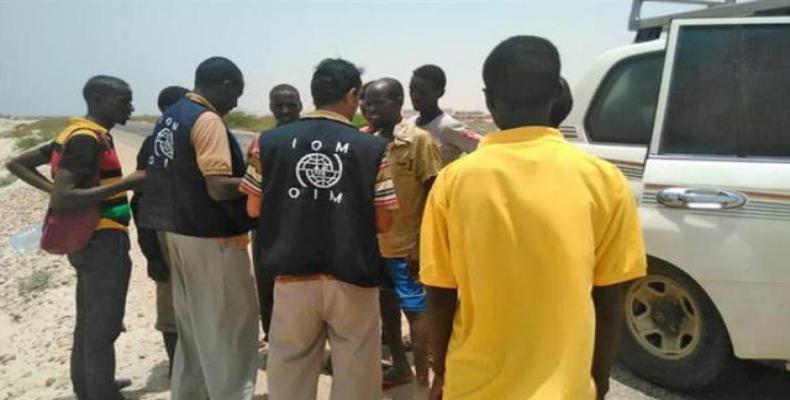 Geneva, August 10 (RHC)-- At least 55 refugees are feared dead due to “deliberate” drowning by smugglers off the southern coast of Yemen in the second incident in two days, the United Nations migration agency says.

“We have seen five bodies and can confirm five dead... Fifty are still missing from this incident, so 55 are presumed dead,” said Olivia Headon, a spokeswoman of the International Organization for Migration (IOM), on Thursday about the incident, which took place earlier in the day off Yemen’s Shabwah province.

Reports said some 180 young Ethiopian and Somali refugees were forced from a boat into rough seas off Yemen by smugglers.  This came just a day after a similar incident in which a smuggler forced 120 passengers off his boat.  The IOM said 50 teenage African refugees were “deliberately drowned” in the Wednesday incident.

Headon said that the refugees who had made it to the shore were physically very weak as many of them were from drought-stricken countries of Africa.  She said many of the 25 survivors interviewed by the IOM officials were in need of medical assistance and counseling support.

“These people are really thin.  There is an ongoing drought situation in Somalia and Ethiopia.  Some may not have had much strength to make it alive to the shore,” Headon said.

Yemen’s lawless southern regions, which are mostly controlled by militants loyal to Saudi Arabia and Yemen’s resigned president Abd Rabbuh Mansur Hadi, have become a fertile ground for smugglers who vow to transfer refugees from the region to wealthier Arab states in the Persian Gulf.

However, most of those smugglers leave refugees at sea as they fear being arrested by militants or Saudi Arabia’s military forces.  The IOM says around 55,000 refugees from the Horn of Africa have arrived in Yemen this year for a better life in the Persian Gulf region.

“It may be the start of a new trend, smugglers know the situation is dangerous for them and they could be shot at, so they drop them near the shore and turn around and get more,” said Headon.