Tens of Thousands March Against White Supremacy Across the U.S. 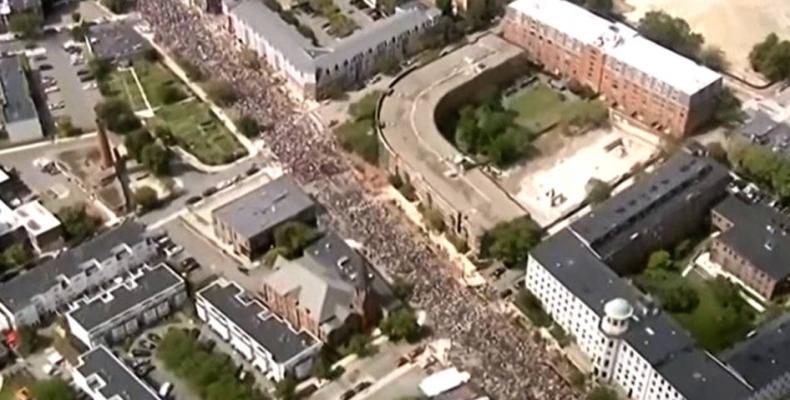 Washington, August 21 (RHC)-- Massive protests against white supremacy spread across the United States over the weekend, as tens of thousands of people took to the streets from coast to coast to condemn violent white nationalist groups and to call for the removal of Confederate monuments and other statues memorializing slavery and racism.

In downtown Boston, 40,000 people poured into the streets around the Boston Common to protest a planned so-called "free speech rally" by white nationalists.  The flood of counter-protesters so overwhelmed the white nationalist rally that aerial photos show only a handful of the extremists even showed up, and that they spent the day huddled in a gazebo on the Boston Common.

U.S. President Donald Trump first condemned the 40,000 people marching against white supremacy in Boston, tweeting: "Looks like many anti-police agitators in Boston.  Police are looking tough and smart!  Thank you."

Trump then twice attempted to tweet something positive about the protests, but both times had to delete his tweets after he confused "heel" -- as in to obey -- and "heal" -- as in recover.  The president tweeted: "Our country has been divided for decades.  Sometimes you need protest in order to heel, & we will heel, & be stronger than ever before."
Trump finally spelled the whole tweet correctly on the third try.

Many commented that Trump’s error was a curious slip, given that former Secretary of State Hillary Clinton had famously used the word "heel" -- spelled H-E-E-L -- in her now-infamous 1996 comments in which she called Black youth "super-predators" and said: "We have to bring them to heel."

Tens of thousands more protesters took to the streets of other U.S. cities over the weekend, a week after one person was killed and dozens more wounded by white supremacists and neo-Nazis at a protest in Charlottesville, Virginia, over the plan to remove a statue of Confederate General Robert E. Lee.

On Saturday, thousands rallied at City Hall in Dallas, Texas, to call for the removal of the city’s three Confederate monuments.  Overnight on Friday, someone spray-painted the word "Nazis" onto the Dallas statue of Confederate General Robert E. Lee.

In Virginia, residents are demanding the name of Confederate General Stonewall Jackson be removed from a high school in Prince William County.

In New York City, members of the group Black Youth Project 100 rallied on Friday to demand the removal of a statue of James Marion Sims, a white doctor who is known as the "father of gynecology" after he experimented on enslaved Black women, without using anesthesia, in order to develop his surgical techniques.  Activists are calling for the statue to be removed and replaced by a statue of three women -- Anarcha, Betsey and Lucy -- who were forced to suffer Sims’s medical experiments.