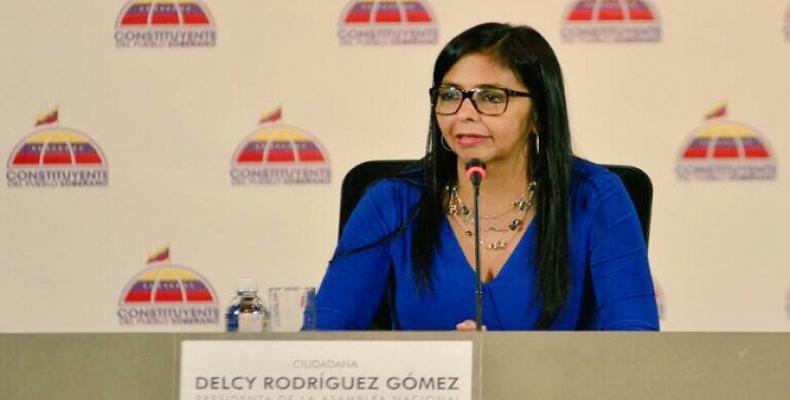 Caracas, August 29 (RHC-teleSUR)-- Venezuela will be a world leader in fighting hate crimes with its launching of a national debate around the proposed Law against Hate and Intolerance, said National Constituent Assembly President Delcy Rodriguez as she reviewed the Assembly's past sessions.  "The hate crimes we see around the world, against Muslims and others, Venezuela plans to lead the fight against these crimes," Rodriguez said during a press conference with international media in Caracas, adding that fascism is a disease that must be cured in every corner of society.

The law will seek to prosecute all incidents of racism, hatred, intolerance, fascism and persecution, with the National Constituent Assembly, the ANC, working to create national legislation that severely punishes this type of crime.  During its first 11 sessions, the ANC has made decisions that have led the country toward the path of peace and recovery, Rodriguez said, adding that since the ANC election on July 30, the right-wing opposition in the country has been unable to mount its continued violent actions since the Venezuelan people have clearly shown they want peace.

Faced with the onslaught of U.S. aggression, including sanctions and threats of military intervention, Rodriguez said that the ANC will perfect the mechanisms to defend the sovereignty and self-determination of the Venezuelan people.  Referring to the sanctions, she said that they "seek to affect the Venezuelan people as a whole," affecting food and medicine supplies, and therefore rejected the position of opposition sectors that urged more economic and political sanctions against the Bolivarian country.

She also noted that the Truth, Justice and Reparation Commission for Victims will review cases of violence going back to 1999 to bring justice to those who have been targeted for being poor, Black or Chavista.  Rodriguez denounced right-wing governments in the region for selling out to the United States, "Don't they see that this is suicide?" calling on them to reflect on what they are doing to the region and to their own people.