Catalonia Declares Independence as Spain Threatens to Take Over Region 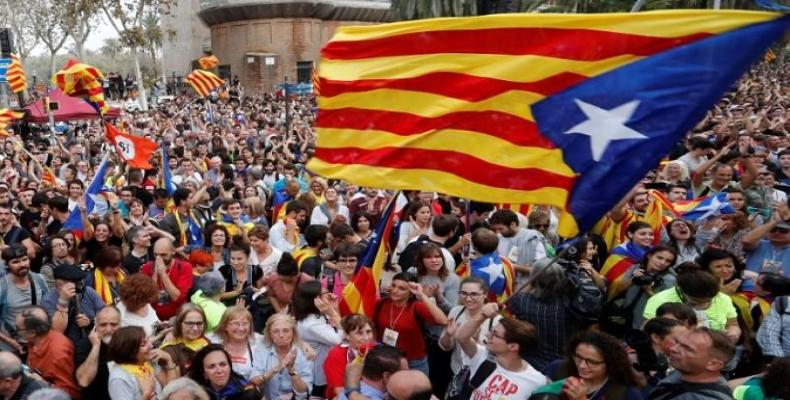 Barcelona, October 27 (RHC)-- After a tense full Parliament session and several weeks of suspense, the Catalan regional government has voted to break from Spain, with 70 votes in favor of independence, 10 against and two abstentions.

The Spanish Senate swiftly responded to Catalonia's self-declared independence by voting to apply Article 155 of the country's Constitution with 214 in favor, 47 against and one abstention.  The constitutional article gives the Spanish government heavy reach to take direct control over Catalonia's government institutions and "restore order."

The Catalan Parliament met to vote on the region's independence and respond to the Spanish Senate, which is set to “take over Catalonia's institutions and police, and give the central government the power to remove the Catalan president.”

The parties, Juntas for Yes, or JxSi, and the Popular Unity Candidacy, or CUP, have written up and approved a constitution for the Republic of Catalan.

Carlos Carrizosa, a representative of the opposition party Citizens, said the constitution was “illegitimate” and added that the independence movement was "sad and dramatic.”

"You’ll go down in history, but you won’t break up Spain. You won’t accomplish this."

During her address to Parliament, Marta Rovira of JxSi, said "I’m suffering political persecution for what i think. Remember we are here to complete the Oct. 1 mandate and protect the basic rights of democracy. The sovereignty is for the (Catalan) people and it always was.” She was interrupted several times by Carrizosa.

There was confusion in the full Parliament session as some members requested to be able to vote for measures in secret, including the independence vote.

Catalan citizens flooded the area outside of the Parliament singing the Catalan regional anthem.

Following the announcement of Catalonia's independence, Spanish Prime Minister Mariano Rajoy called for "tranquility among all Spaniards."  He added that the government "will restore legality in Catalonia."