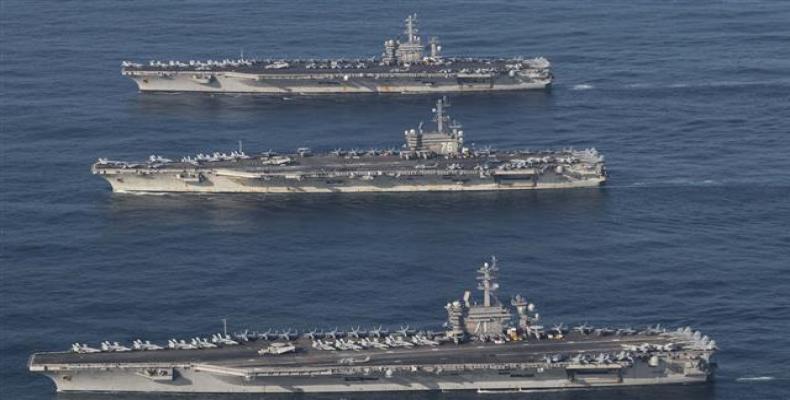 Pyongyang, November 14 (RHC)-- The Democratic People's Republic of Korea (DPRK) says the deployment of three nuclear-capable U.S. aircraft carriers to the Korean Peninsula has increased the risk of a nuclear war.

U.S. and South Korean warships launched war games off the coast of the Korean Peninsula in recent days in an unusually strong display of force aimed at North Korea.  The joint drills -- which began over the weekend and are slated to end today -- involve three U.S. aircraft carriers.   The USS Ronald Reagan, USS Nimitz and USS Theodore Roosevelt, along with seven South Korean warships and three destroyers, have been taking part in the maneuvers.

On Monday, North Korea's UN Ambassador Ja Song-nam said in a letter to UN Secretary General Antonio Gutteres that the U.S. aircraft carrier groups have taken up “a strike posture" which has created "the worst ever situation" around the peninsula.  He also said the United States has started round-the-clock flights with B-52 strategic nuclear bombers "which existed during the Cold War times."

Ja said "the large-scale nuclear war exercises and blackmails, which the U.S. staged for a whole year without a break... make one conclude that the option we have taken was the right one and we should go all the way to the end."

The U.S. Air Force is reportedly preparing to place its fleet of B-52 bombers rigged with nuclear weapons on 24-hour alert for the first time since 1991 amid escalating tensions with North Korea.

The North Korean leader ordered the production of more rocket warheads and engines in August, shortly after the United States suggested that its threats of military action and sanctions were having an impact on Pyongyang’s behavior.

Pyongyang says it will not give up on its nuclear deterrence unless Washington ends its hostile policy toward the country and dissolves the US-led UN command in South Korea.  Thousands of U.S. soldiers are stationed in South Korea and Japan.

Analysts say U.S. threats against North Korea are counterproductive and justify Pyongyang's nuclear weapons and missile programs that it insists are for self-defense. They say Trump's rhetoric could have an opposite effect, intensifying the deteriorating situation in the Korean Peninsula.